What does it mean when your spirit animal is a creature that went extinct hundreds of millions of years ago?  Trilobites have been an obsession of mine since second grade, when I first learned of them.  I hunted their fossils many afternoons of my childhood, even though I only found one or two poor specimens.  I was never discouraged by that - the hunt was its own reward.  I loved to draw them and daydream about them.

Recently they began showing up in my dreams and thoughts again, and I realized that they've been carrying a message for me all this time.  They embody a certain kind of glee and simple curiosity, scuttling their way across the world's sea beds for hundreds of millions of years.  They were the dominant animal form on Earth for millions of years and evolved into hundreds of species which are still being discovered and cataloged.  They were one of the first creatures to evolve eyes, with lenses made of mineral crystals (the first glasses? goggles?), and sight gave them advantages that made them one of the most successful beings to evolve on our planet.  Their message nudges me playfully when I most need it.

This piece seemed to rush all at once onto the paper as a pencil drawing about a year ago, but then I was stuck for months.  I didn't know how I wanted to paint it.  Then one afternoon I just took a brush that seemed much too large for the job (Frondine - she's a big "bright") loaded her with French ultramarine and painted all of the darkest passages of this in about 30 minutes.  Not overthinking it - just turning the brush this way and that, squeezing and twisting her way through the tight places and filling in the larger ones without fuss.  As if we were feeling all the edges of the plates with bristles and fingers, or doing a maze together, with our hand against the wall the whole way round.  The rest came gradually over several more months, on and off.  When I close the door of my studio, there it is, at eye level, like a big grin from the Cambrian period, five hundred million years ago.

It even has the Emery nose bulb...  definitely a relative. 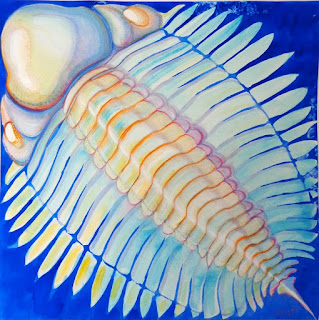 Last fall I was taking the long way home (old NC 10 between Durham and Hillsborough) when a large owl glided across the road, landed on the embankment, and turned it's head to look right into my eyes.  The face was as disturbing and odd as the Great Grey Owl, but they don't live anywhere near North Carolina.  It had concentric dark rings around it's eyes and a flat round face with the eyes and beak in the center.  Here in NC that probably means a barred owl.


That look has stuck with me.

This pastel seemed a natural result.  There is a very busy, rather terrible pen scribblesketch under this pastel, showing multiple re-positioned owls, some faces with four or more eyes to choose from, and several last minute additions to close the ranks.  One owl turned 180 degrees horizontally and the head 90 degrees vertically as well as changing species.  The owls in the upper left and the lower left went on the page nearly effortlessly, with almost no revisions, but they were nearly last and I was getting the hang of them by then. 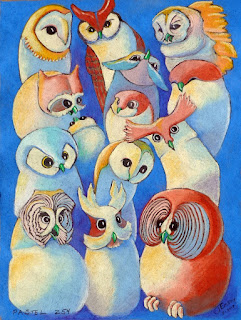 All owls here are inspired by actual species with varying degrees of exaggeration as they passed through my mind and hand.  I looked at a crazy number of owl photos one evening prior to drawing this and these don't come close to the weirdness of some real examples online.  And their lives and relationships with humans and pets are fascinating, too.