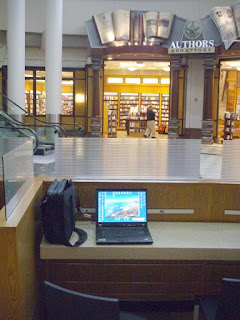 Been on the road a lot lately. In Minneapolis' airport (the only part of Minnesota I've seen yet) I worked through a few hour layover. This was my "office" away from my office. The bookstore in the background was a temptation, but I resisted and stuck with the powerpoint project I was finishing up. Not exciting, but I feel better having it out of the way. 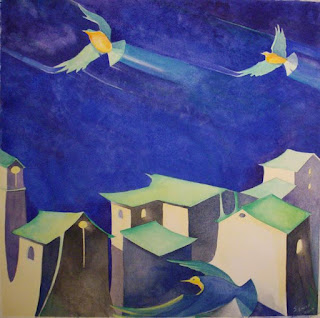 I had a quiet weekend with family and my paintbrushes. This was the visible result.

I also updated my gallery - got the most recent pieces out there, including this one.

I've been listening to Frou Frou's album, Details. I like it a lot, which surprises Daughter because it borders on Techno, and that's not usually my thing.
Posted by Steve Emery at 9/27/2009 06:19:00 PM 14 comments: 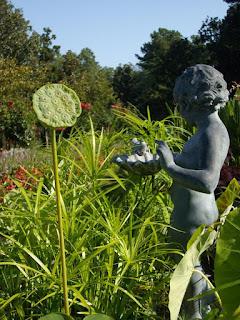 Last weekend we went to Duke Gardens to wander and take photos. This small fountain, planted in papyrus and lotus, had lots of possibilities, and I took a number of shots. 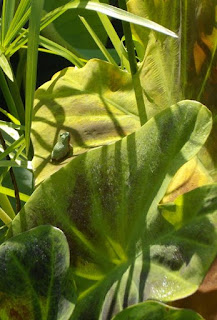 But it soon became about the tiny tree frog which Oldest discovered on a papyrus plant. Then we found another. So I looked further and found two more in that same small fountain garden, one golden colored, instead of green. They were each just a little over half an inch long. Soon we had other passers by stopping to see what we were seeing, and we had fun watching their faces as they finally spotted the frogs. 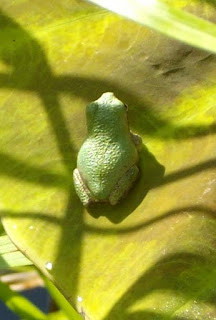 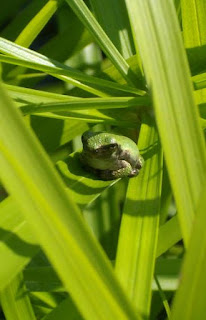 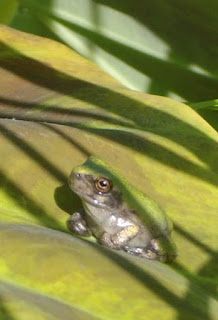 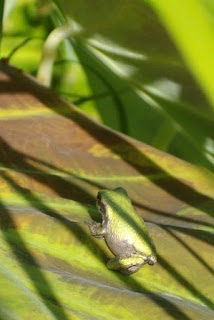 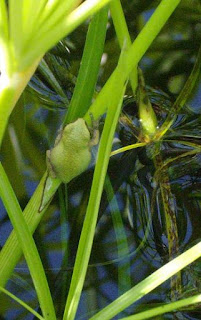 The Last Pie of Summer 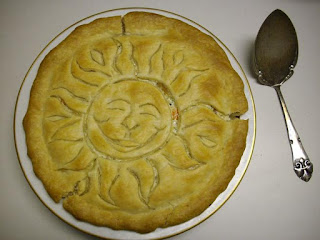 A pie was requested - chicken, mirepoix, ricotta, garlic, salt, pepper, basil, and sage. It's either the first pie of autumn, or the last pie of summer...

All the Black Roll-ons Look the Same 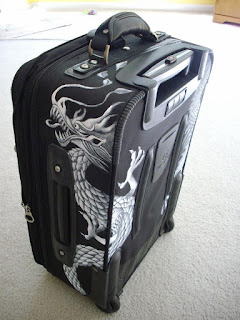 I have been flying more lately (not my favorite, but I'm getting almost used to it). On a recent trip home, arriving around midnight, I stood at bag claim and watched all the luggage. Half the bags looked enough like mine that I had to look at every one carefully. Inevitably they come out on the belt upside down. From that view my own bag looks unfamiliar. 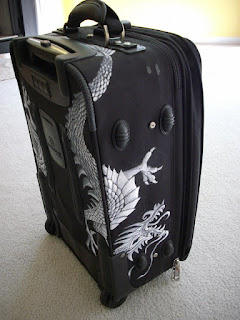 I had tied some yellow yarn on one side of the top handle, and I do spot it that way, but it's too subtle for midnight grouchiness. If I'd been a comic strip at that point the thought balloons over my head would have been liberally sprinkled with strings of energetic symbols, like Sarge in Beetle Bailey. In the last frame of the strip I vowed to paint something on my suitcase so I would not be doing this again.

When I considered the job I realized part of the problem is that in the crush of bags I might see one or two of the six faces, but there would be no predicting which ones. The front, with the red Victorinox button, is the only one that I recognize, and it's the one I see least on luggage conveyors. So I knew I had to do something on five sides. And I'm seeing more of the Victorinox bags... I want to prevent a mix-up. 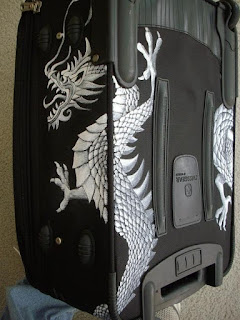 At first I considered some stenciled symbol that would be easily spotted from a bit of a distance, so I could, "Excuse me" through the human crush to the conveyor in time to grab my passing bag. But as I thought of the symbol, I couldn't come up with anything that interested me or seemed unique enough. 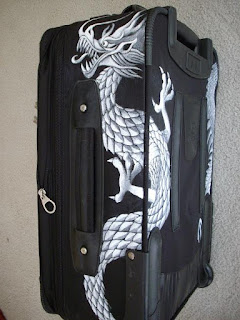 Oldest's various projects for Design school inspired me to push past such a mundane solution. I thought of Chinese dragons (lungs) twining around the bag - because I've always loved them, and because they are thin enough to work between all the leather and hard plastic caps, handles, and corner guards on the bag.

So here is the result. I only did two legs each, not the traditional four, due to space constraints. I had thought to do it in color, after underpainting in white to get brightness, but I liked the elegance of the black and white, and so I just brought out light and dark with repeated coats of the white. The bag material was challenging to paint on - it's a nice tough weave. 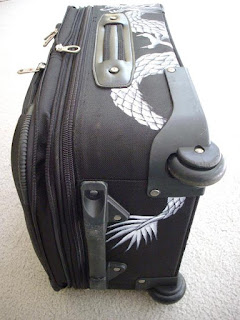 One lung is upright, the other is head downward as the bag is set on it's rollers. They're rivers and air creatures in Chinese lore, so rightside up is arbitrary, and having them twining all around the bag is what I was after. Some part of the dragons is visible on every side but the front. 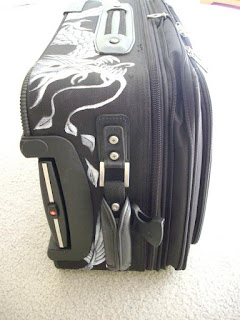 Oldest asked me, before I started drawing them, how many toes I would put on them... I immediately replied that I would use the imperial five toed lungs. But on further consideration, I like the reserved status of the imperial dragon. And I prefer the four toed configuration aesthetically.

Where Did Summer Go? 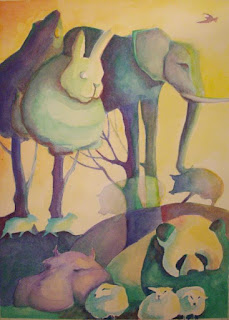 I flew home this weekend, in the middle of a business trip, and then back out of town on Monday to continue it. First time I've left my car somewhere else and flown in and out of home, instead of the other way around with a rental car. It still has me feeling inside out somehow.

But mostly I feel like the summer vanished while I wasn't looking. Our oldest started college; the weather turned cooler and rainier; the crickets took over the insect chorus from the waning cicadas.

This weekend I painted this little piece - a reach back towards fading summer, end of childhood, the last pinky golden light of the day, wistful ends and exciting new starts, my favorite season of autumn. The landscape and creatures are jumbled as in my dreams. It took a few hours to start looking anything like I wanted, then it finally got in line. I had to get the pigments dark enough to make the light work. About 10.5 by 14 inches, watercolor. It was nice to see when I got in late this evening after over six hours of very steady driving. I was so eager to get home. I feel like I've been gone for weeks. I guess I sort-of have. I held Dearest for a long time when I got in the door. Youngest came out of his room and threw himself at me when he heard my voice. Life can be as sweetly lovely as the theme of this little painting.
Posted by Steve Emery at 9/02/2009 10:29:00 PM 7 comments: