In recent weeks I've walked in familiar and unfamiliar places in my studio.  Here are four recent works (or works in progress). 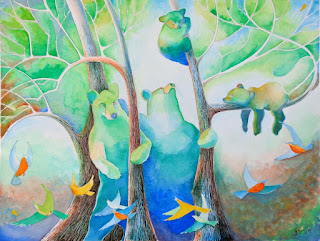 First, there is this commission for a family theater and poker friend, inspired by Ursa Major and Ursa Minor, a watercolor I did years ago.  I'm happy with this result and it's renewed my energy for watercolor painting. 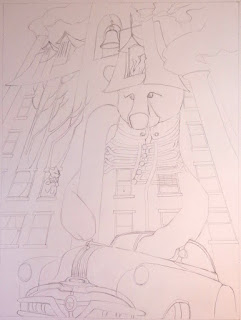 Apparently not done with bears (I did have to look at a LOT of black bear images for that commission) this is the next painting in progress.  Both are 24 x 18 inch watercolors (or will be, once I start painting the second one).  The car in this drawing is a 1952 Pontiac Chieftain, chosen for its looks after viewing hundreds of vintage car photos from the 40's, 50's, and 60's.  A few more cats are planned for this drawing - probably playing brass in one of the windows.  Other things could happen, but I think this is nearing the end of the drawing stage - paint soon. 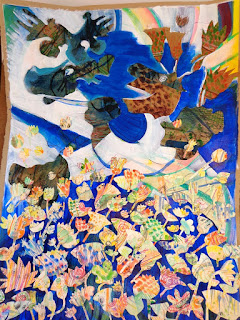 And then there is this unusual piece which has been a child-like chortle for me.  The background has been three different paintings which have been painted over each other (acrylic on paper).  Then I responded to several cut out random shapes I had lying around (the brown paper heads and antlers of the deer/horse and riders, and the main rider's boot) plus forms emerging in the layers on the paper (I "found" the people and the deer/horse and their relationships to each other).  Then I took an unrelated sheet of white paper and doodled and spattered and played all over one side in ink and watercolor and colored pencil one rainy afternoon.  Toothbrush spatter, paint thrown from a brush, and doodles all over it in multiple layers.  Then I flipped that over several days later and drew dozens of flower silhouettes on the back, nestled close together but not touching, covering the entire reverse side.  I cut those out over a week of evenings (my hand can only take so much scissor work at one go), and then glued them last Saturday (using acrylic medium under and over each shape, like decoupage) all over the bottom of the painting, after laying down an Ultramarine background.  That's where I am for now.  This has a long way to go, I think.  It's some kind of play hero's journey and I've only completed three legs of it so far.  I have only the faintest idea what's next.  Each step has surprised me.  More photos of the process on this one are attached at the very end of this blog post. 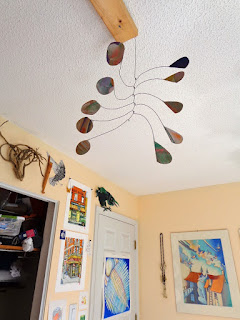 And I have had ideas for mobiles pop into my head, so I started a sketchbook of those ideas.  This is a Calder imitation I made from florist wire and more of the random scribbled brown paper I have lying about.  It's temporary (just taped together, weighted with pennies and dimes).  I wanted to understand how these "nested" forms interact, and how the weights and flags affect the movement and balance.  I learned a number of things and will never look at a Calder mobile the same way again.  This form is made from four equal lengths of wire, shaped similarly (with gradually exaggerated differences) so that they hang from each other in a sequence.  The elegance and beauty of the concept are examples of Calder's genius.

Below are some photos of the process on the Wild Ride piece.  Finding the figures in the shapes, clarifying the deer/horse, the doodle for the front of the flowers, the flowers on the back for cutting out... 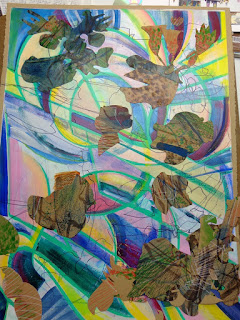 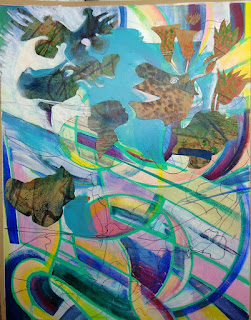 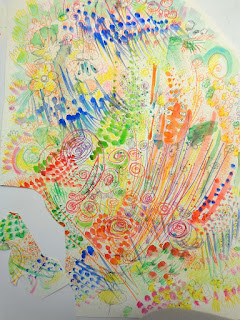 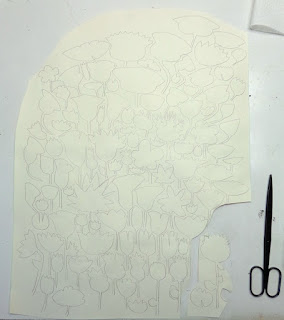