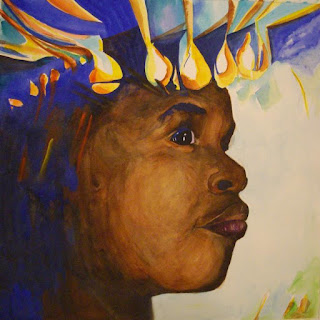 I have a folder of photos of faces I've been saving for paintings. This image began as a series of blind contours (my usual warm-up/loosen-up), which led to the shapes that ultimately became the crown, or flames, or whatever they are... The face seemed like the right one for today, so I just dove in. I enjoyed every moment of this, from capturing the features in pencil before starting with the watercolors, to the hours of color glazes that built up to the final surface. The time flew. I listened to two albums by Jimmy Eat World, back to back, four times. There were some silent spells between starting them over, when I was lost to sound. I guess I painted for about 5 hours.

This is my first attempt to paint an African face. I was drawn to the beauty of the features, and the play of the warm and cool browns. It was done all in one long afternoon session and finished in an hour or so the same evening. Watercolor on Arches hotpress, 19 x 19. Click on the image for a larger view.
Posted by Steve Emery at 6/27/2010 04:00:00 PM 4 comments: 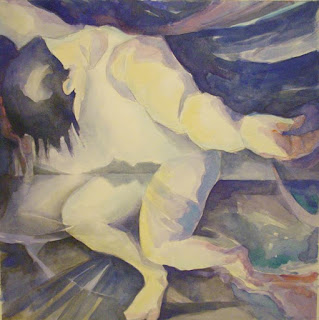 This painting is the one I've been stuck on for about a month. Travel (family and work) has taken a lot of the time and energy in recent weeks. That's been good and bad... but it has definitely made it harder to paint. Even when there is time there isn't enough energy.

And this image has been in the way. I had to do this one first.

When the image emerged on the paper, in a mass of lines from blind-contour drawings of paintings of totally unrelated subjects, laid over each other in every orientation (I turn the paper), I was surprised. Then I realized what it was, and what that bleak landscape in the center meant to me, and I knew the title. That led to the color scheme, and the surrounding darkness. Figuring out how to handle the head, and refining the muscles further took a while. Then the image just wouldn't finish - it always seemed to need more. Every time I thought I was done it seemed to need more the next time I looked at it. Like the emotion itself...

I had a recent visit with my Dad where he was more energetic and humorous than I've seen him in over a year. I left later than I meant to, and barely made the next family event in that busy weekend, but I couldn't tear myself away. I loved getting more of him back. I couldn't get enough. The chemo is working, but it has some harsh side effects, and it's not a cure. The enemy has been mostly shut out, but the seige continues, and the defense takes a lot out of Dad. That's what I'm grieving, I think - the partial loss. 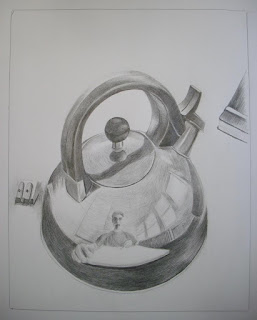 I discovered a few years ago that I can usually get an additional drawing done on vacations if I set it up somewhere so I can sit for even five minutes at a time and keep making progress. This makes me happy and it fills in all sorts of little waits and odds-n-ends of time.

This trip, to Marblehead, MA and Boston, I decided to combine a little self portrait with a rendering of an object that I found in the kitchen of our rented house. I love these round kettles - but we don't own one. 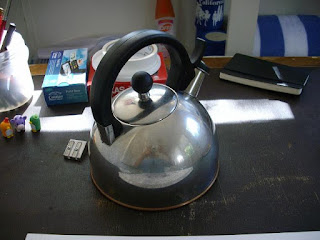 I can see one significant error in the drawing (maybe you can find it, too) but I'm happy with it anyway. I enjoy looking this closely at things (only a detailed rendering gets me this far into an object's shape and lighting), and I'm particularly pleased with the handle. The photo is a good bit darker and higher in contrast than the real thing was when I sat to draw, usually with good light in the little sun porch I set up as a studio. 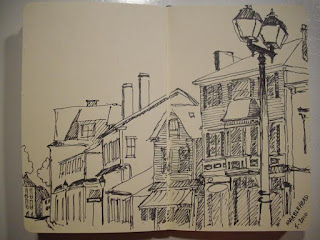 I didn't get a lot of time to sketch in Boston or Marblehead - we explored and wandered so actively for the 7 days we were in MA. But my little moleskine ("Poco Uno" as it says inside the front cover = so it won't get confused with "Grande Uno") was in my back pocket a lot. The first sketch here was from Marblehead - I sat on a bench in the street near our rented house and drew this (in pen) to remember the place by. The owner of the garden store next to the bench came out to sit and see what I had drawn, and told me the best restaurants in Marblehead. We had already dined at one (The Barnacle). 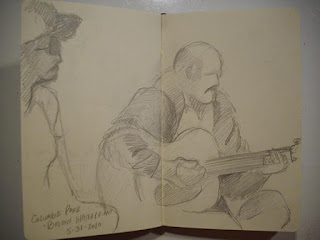 The next three are rapid pencil sketches done on Memorial day in Columbus Park, near the Aquarium. I loved the Aquarium, particularly the cuttle fish, the penguins, and the four storey tank, but the crowds finally roused my claustrophobia, and I had to go outside without finishing everything. So I let the others meet me later by cell phone connection, and I wandered out into the sunshine and sketched what I could. People sit still for surprisingly short spells - it's hard to have time to catch anything. The guitar player was better than most, because he played four upbeat songs from the 60s and 70s before getting up to leave. 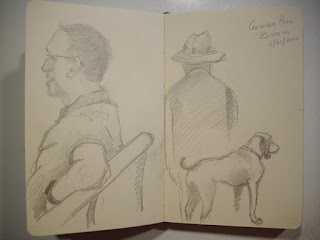 The last sketch is a longer study in Grande Uno, my larger moleskine, and is of the Marblehead Harbor. Local teenagers were pushing each other off the floating dock below me, and the boats had increased all week in the harbor until there were probably several hundred spread from Crocker Park, where this was drawn, all the way over to the neck. 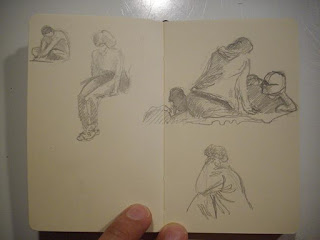 The best thing about sketching, to me, is the way the drawings later evoke the place more powerfully than any photograph. It's not the sketch that does this - it's the remembered cumulative time and actions that created it. It puts it more firmly into my memory. 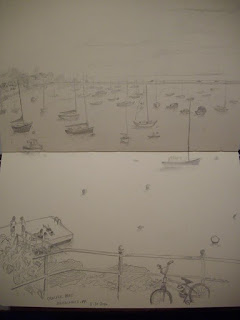