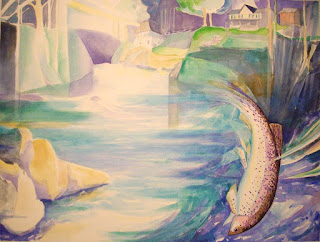 I grew up in a white elephant of a farm house in Columbia County, NY, across the road from a beautiful trout stream. That trout stream's name was Dutch, like almost all the older place names in the county, which had been settled when the city at the mouth of the Hudson was called New Amsterdam, not New York. Here in NC, where rivers don't get large until much closer to the sea, the stream would be called a river. In Dutch it was called the Roeliff Jansen Kill. We just called it the Roeliff, or "the stream." Many days after school, from the first days we moved there when I was six years old, we would call through the back door, "Can we go down to the stream"?

My memories of the Roeliff are what I painted here. I know there are all sorts of fictions in this, if I were to stand in this spot in the water in relation to our house (up there in the upper left of the painting). The stream passed through a narrows across from our house, and went over some large rocks, so there was a continuous music, and rapids even in the driest summers. I loved to climb down the steep slope into the stream bed and leap from rock to rock, holding a long stick to help with balance or to vault the gaps. I remember its smell, its sounds, and the bright chatter of light on the busy, broken surface. It was a peaceful but bustling place.

And it was full of trout, which I spent countless hours trying to catch with spinning lures and artificial flies. The rainbows (fish depicted here) would leap clear of the water sometimes, and they were the easiest to catch, stocked several times per year by the NY fish and game department. Brookies were a little harder to find. The long term residents were the big browns, wiley patient fish that lurked in the shadows under rocks beside rapids and cascades, waiting for a meal to drift by. I felt lucky to get some of the larger ones just to show themselves coming out to check my lure - I never caught one of the ancient beasts. To this day, though I no longer go fishing, I love to read a stream or river, looking for the signs on the surface that hint where fish are probably hiding.

I'm not happy with this composition, nor with this painting, but it was pleasant to spend time here, remembering. This is where my father taught me to cast a lure. This is where he took us swimming for the first time in running water, a very different thing than swimming in a lake or in a pool. A mile up the current, on Turkey Hill Road behind Gaddis' store, he jumped first into the stream off the bridge, paving the way for my first time. The drop seemed to take forever and then the water slapped the soles of my old sneakers and exploded over my head. Terrifying and thrilling - a rite of passage for the older boys and young teens in our little community. He got us a huge tractor inner tube one summer, and we rolled it bouncing up the road, nearly as tall as we were, and floated back down the stream countless times. Horseflies would land on the hot black surface and we'd try to smack them before they realized we were fresh prey. If the fly found one of us first, we would yell, "Horsefly!" and all roll off backward, like scuba divers from the sides of a boat. Last one on was frequently tipped in also, as the whole crazy raft upended. Dad patched that tube over and over, a casualty of the hot summer pavement and the sticks and rocks in the stream bed. 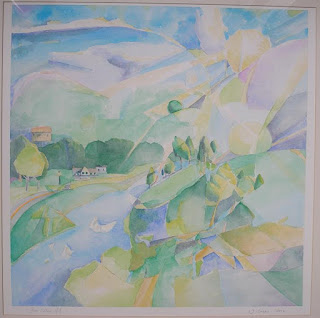 This much earlier painting of mine is also a memory painting of the Roeliff, Turkey Hill, and our house. It's a better painting than the one up top, which I might cut up into smaller pieces for other purposes.

I'm not sure where the pursuit of my father will take me next. I suspect it will still be in this place, though. The Roeliff passed only a few hundred yards from the hilltop where the landlocked sycamores stood side by side. Actually, in this earlier painting, if you find the round green tree on the hilltop to the right of the house (that's the "Roll-out Pine" because we used to climb up and then backward summersault down a spiral of branches that would bend and roll us out onto the golden slope - pine sap all over us) you will be close to the sycamores. They would be on the next hill over, further into the dream and just to the right of this memory.
Posted by Steve Emery at 1/21/2011 09:01:00 PM 4 comments: 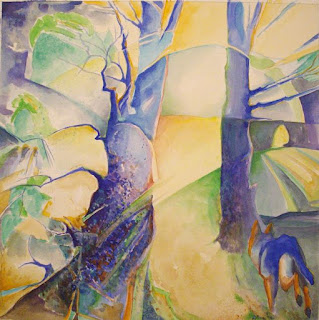 This is probably not finished, but it's close, I think. I have to make some adjustments to the closer sycamore - too speckley. And I may change some of the other shapes after I live with it a bit.

But this captures some of the feeling of the memories and the imagined place, the excitment of passing between these two trees. In reality they were young and straight and without much character - but in my imagination at the time, and certainly in my memory, they grew. Striding through them was a symbol for me of passing beyond daily cares, beyond recall, as I was then too far away to hear a call or a bell from home, passing into a place without constraints other than the end of the light and the strength of our six legs. It was the door into a private world I shared with no one but the dog. And I brought home treasures... walnuts, fern fronds, seed pods, large pine cones, pearly everlasting, oak galls, stones polished orange by a half century's rusty rain water falling from old barn roofs.

And this piece is getting back to the way landscapes FEEL to me - the way trees and other things break the world into separate panes, like stained glass windows, but with nothing to restrain the light. I've painted this in other pieces - I've missed it, and I'm glad to come back. 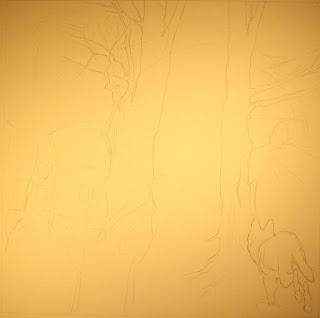 Last night our cul de sac had their annual New Years progressive wine and appetizer wander, from house to house. This is my favorite non-family social event of the year. I've written here many times about our neighbors and the amazing fortune that placed so many good people all in one short street. Last night was the first time I've seen some of them since my father passed away on the 11th of December. As so often happens to me, I split my awareness when talking with people, and so part of me had several deep conversations about loss or about my painting - subjects my neighbors brought up, genuinely wanting to know - and another part of me was overwhelmed once again that even in a festive event, with a crowd around us, we could connect this way. For instance, Julie wanted to know what I was painting now, and was interested when I spoke about the pursuit of my father by painting dream landscapes from my childhood. Later John pulled me aside to share his sorrow over my loss, and listened while I spoke about Dad's last months. He had lost his own father a little over a year ago, and his empathy was genuine and immediate. Jeff and Catherine also listened, and understood the way the grief will probably jump out at me at unknown and unexpected moments.

This morning I began the first of these dream landscapes, and things just fell onto the page. Mom had mentioned sycamore leaves to me several days ago, and that's what triggered the whole sequence of thoughts that led to this understanding. I can find my father in these landscapes, and I have wanted to paint these forever - it's why Hundertwassser and Filer get under my skin, because their paintings are dreamscapes to me. So this is the first. Landlocked Sycamores, a place the dog, Dallas, and I would run to after school nearly every afternoon. Between those two trees was the gate to my inner and outer world, my teenage sanity.

And as I drew the dog and the place came into focus, I was overwhelmed by the loss of my father, knowing that he, like this precious memory, is a place. He created a huge, safe, important place where we grew up, and where I lived without question and almost without knowing it. I wept.

I am grateful for these combinations of events and memories that will help me reconcile this loss. I'm even more grateful for the people in my life who create the places where it can happen, from Dearest, who has understood better than anyone what I need during this time, and who has been RIGHT THERE where I need her every moment, to my mother, who is dealing with so much more loss and gap than I am, to my neighbors, with their warm hearts and listening.