What Do I Want to Paint 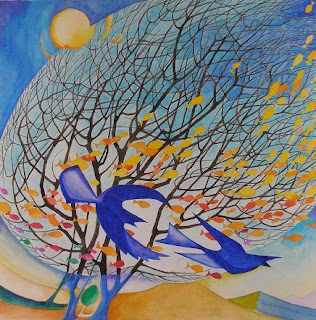 I read a timely blog post today.  In fact, since I took a new job almost two months ago, making a leap of faith, a striking number of things have been timely.  Maybe because I'm looking for them, or because I find myself in complex, difficult waters and feeling lost much of the time so everything looks like a sign.

The post is on Tiny Buddha - a rich source of everyday wisdom, the kind that is deceptively simple and therefore deeply helpful.

When I took the new job I decided my motto would be one that runs against my nature, in some ways, and in line with it in others.  I took Rikki Tikki Tavi's family motto, "Run and find out."  The curiosity is easy; getting out and into other people's business is not.

I am at my best when I am self forgetful, letting the work and the facts and (mostly) other people be what's important, without much concern for the opinions of others.  Trusting (again, forgetful might be the best word) that my responses will be right because I was raised that way.  Doing what seems right and trusting others to understand or (better) to join in.

But when I'm stressed, and feel the stress of others, it's easy for me to turn and concentrate on my fears, or on my doubts, or on the feelings of dissatisfaction I imagine in others.  I hear their frustration or disagreement and take it as a judgement on me.  This is misplaced, but it's an old bad habit, and easy to fall into when I'm tired or out of balance.

It's like a rapidly turning machine that starts to oscillate when the center gets out of adjustment.  It's surprising how quickly the problem gets worse, as balance is lost.  And if you throw something heavy into this situation, the results can be destructive.

The trick is to slow down, recover the center (purpose and the perspective that it's not about me, it's about others and the work to be done), and restore the balance.  Then speed back up.

When the center holds, I can enjoy the newness, the uncertainty, the opportunity to learn and to do new things, and even the feeling of being lost.  It can be boring, always knowing where you are.  As a teenager I recall being frustrated and feeling inadequate if I could not identify every tree and wildflower around me.  Now I am delighted when I find a tree or plant I have never seen before (I saw two today, in fact).  I deliberately drive out into the countryside or wander off into cities without plan or map in order to get lost and have the surprise and delight of finding my way without knowledge (I did this last week in Chicago and ended up eating terrific pizza overlooking Ontario St and meeting some great Navy officers).

Which brings me back to the title of this post.  My new job looms large in my mind nearly all the time right now - partly because the challenge is the infinite kind, where this is no limit to how much you can accomplish, and partly because it's still so very new.  But I have deeper challenges and older questions to answer which are in the same class.  The one that still haunts me most is, "What do I want to paint"?  I actually do think I've answered that, but I haven't begun.  And I haven't begun because I don't know how to begin.  And the new job and the Tiny Buddha post should make it obvious that my problem is I'm still concentrating on getting it right, rather than on doing it.

When will I begin doing it?  The first moves will be clumsy and unsatisfying, I fear.  But how else can I get to the place I want to go?  And I suspect I might be wrong about the "unsatisfying" - I think it will probably feel great.  Fear of judgement (my own and others') is what holds me back.

And, as another wise art teacher told me over 30 years ago, "You need to get over that fear right now."  The irony of that sentence didn't strike me until I reread it.

But "right now" is still available.  And the question has shifted; it's not "What do I want to paint?" but instead, "When am I going to start?"  I'm the only thing in the way.

(The image above is a painting I did several years ago that borders on where I'm going.  I think of this as a self portrait, where I am both birds.  I'm doing well when I'm the gleeful bird in front.  I'm doing badly when I'm the second-guessing, fearful bird in the rear.)
Posted by Steve Emery at 8/26/2012 12:22:00 AM 5 comments: