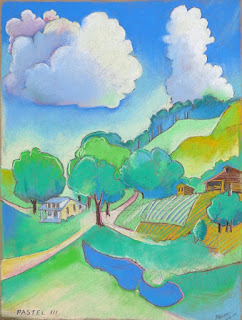 Last weekend, in the 95+ degree heat, we checked out Orange County's latest park.  Due to the generosity of the two last Blackwood sisters (Mary and Nannie), and after years of dialogue and debate with the county, we now have another beauty spot near Hillsborough.  The Blackwood Farm has been preserved for hiking, events, and history.  The place has a peaceful spirit over it, and a breeze under the huge sugar maples surrounding the old house, which lured us into sitting at a picnic table for almost half an hour, watching towering clouds form above the tree line across the rolling fields.

All my life, since I was a small child, I have wanted to be able to take in a place, a feeling, an event, and have them emerge from me in colors on paper or canvas.  These last few weeks it has begun to happen.  We came home from Blackwood Farm and I stood in our garage, sweating profusely as the late afternoon sun flooded in the open door, and drew this in about an hour and a half.  It just poured out of me onto the page.  It's incorrect in all sorts of ways, if you compared it to the real place, but it's Blackwood Farm.  I showed Laura what I was doing and she exclaimed, "That's where we just were!" and I pointed out the wrong placement of pond and buildings and she also agreed that somehow this was more true than a literal image could have been.

I have several more pastels that have been completed lately, and I skipped them to show you this one. I'll show the others soon.

Women and Girls - Pastel 108 Out of Order

I am posting this out of order because I've been waiting several months for this one and it finally arrived.  I am deeply moved and angry about the treatment of women and girls in our world. 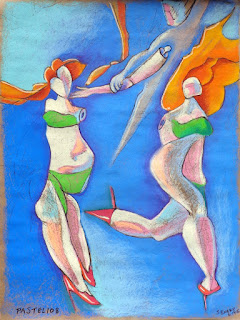 I feel that regardless of the progress made for equality, our society (men and women both) is finding new (and renewed) ways to treat women as objects and handicap them in ways that are pervasive.  Of course this happens to all sorts of people and groups of people, but while I hate injustice in any form, I am particularly invested in this subject through my relationships with my wife and with my daughter.  This issue has sunk its teeth deep into me, and I expect more images, and with the images, more conversations.

Several things aligned to make this pastel happen.
1. I finally have a fast enough and open enough practice to allow the inner images to emerge.  As far as I can recall, I have ALWAYS wanted this channel.  I never actually made the effort to open it.
2. I've grown recently alarmed at the way cultures (including our own) treat women and girls.
3. I realized that for the first time I had an emotionally charged theme that would also inspire my images, and I began to think about that often.  I started some conversations with family and friends about it, as well.  I made the connection between the emotions and the art.

The result is that this first image about our society and women emerged this weekend.  The piece happened in the usual way, but after over a month of no pastels (mostly being so busy at work, home, and Kickstarter).  With some encouragement (nudges) from Dearest, I stood before the page, drew a mess of pen lines and this began to rise to the surface.  I finished it in a single hour long white heat (literally, because it was about 95 degrees in the garage where I have to do these).

The trigger moment, as is often the case, was one indelible real memory - another image.  At the Saturday Solstice Party of our wonderful neighbors one of our other neighbors arrived late to the evening poker game, freshly showered, having put her 3yo to bed and baked her a birthday cake, and dressed in a strapless sundress.  The memory of her shoulders and neck rising up out of the dress, and the slender delicate beauty of them as she stood near our poker table were evoked by the lines on the paper that became the left hand figure's right shoulder and tilted head.  As I saw that one fragment and in a flash of memory recognized the human figure it would become, the rest of the piece emerged as if the lights were being turned up in a dark room.  Mind you, this piece is not directly related to that neighbor, but the memory of her shoulders and neck were the recognition point for the first figure to be pulled from the pile of random lines I had put on the paper as a start.

And as the other figure emerged, and neither of the women had arms, I knew what this was.  Then I got out of the way and let my hands and my cold rage finish it.

I hope this happens again.  And again. 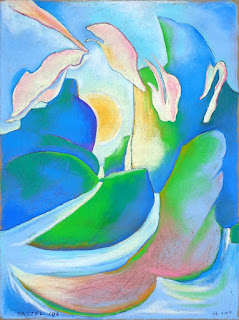