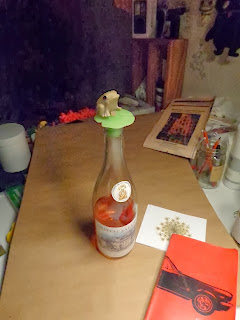 Eh bien - c'est moi, Grenouille.   Etienne is doing the typing, and using his login for this post.  The occasion is the arrival, from AKUBA, the family of the sister of the cheri of Etienne, of this "lilypad" stopper for the wines.  This tower which supports the pad (en réalité a leaf of the lotus - view the pink seed box between my toes) is vin rosé from the Rhone.  I have never splashed in the waters of the Rhone, but I have heard the vin c'est très bien.  It was très émouvant for Karen to send this pour mon élevage et agrandissement.  I feel grande indeed, merci, AKUBA!

On other topics, Etienne said he has received several ribs from amis who are fatigued of his silence in the book of faces and the blog.  The cards of Christmas have delivered some of these ribs (he did not show me the bones, it seemed they were only marks in the cards).  Etienne is considering.  It made him laugh full of rue (avec regret).  Perhaps there will be more posts?  There have been paintings and drawings with no reportage.  Perhaps Etienne is owing others a "peek"? 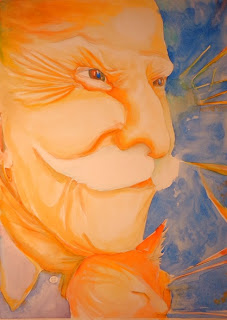 I have a completely unfounded and yet vivid view of my Hungarian ancestry.  This image captures some of that feeling.  He emerged on the paper, as did the cat.  If anything factual informed this face it was my recollection of my gentled fierce tempered Magyar grandfather.  Something of his humor and spirit (or how it affected me) show in this painting.  I don't recall him liking cats, though... 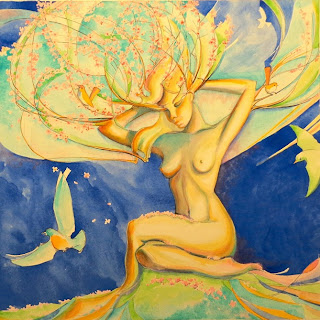 A friend at work commissioned a painting of a dryad.  She wears a pendant that is a relief sculpture of a dryad, and has long been fascinated with the image.

The idea inspired several pieces, three shown here, and at least one more still on the way.  Since I was a teenager I've also been fascinated with caryatids and dryads, both of which combine the beauty of women and the grace and grandeur of columns and trees.

The first image that emerged was of a weeping cherry with her arms and hands up in her hair of blooming branches.  The figure I used as inspiration showed the beauty of youth and the lovely bow of her thigh over her other leg.  I tried to capture that bend of head and neck and the expression girls often have when they are focused on what their fingers are doing in their hair.  I was thinking of blossoms falling and the quiet immobility of trees that would allow the pink petals to lie undisturbed on her lovely curved lap 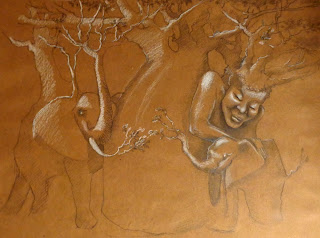 The next idea that came to me was of baobabs, large motherly trees with soft masses of concentrated leaves above and elephants below.  So I did a pencil and white charcoal sketch of Mother Baobab, tending young elephants, inspired by the strong face I remember when I think of Mabel Bullock, one of my highschool art teachers.  She inspired younger artists in the 1970's, particularly young African-American women.  Drawing this gave me time to feel emotions inspired by her fostering spirit, and the awe I feel for creatures like elephants (or artists) because they seem so unlikely and enchanted.  The reaching of the elephants around her emerged largely on its own - the kind of thing that often happens when I get out of the way.  If I ever paint this I plan to texture her bark with an African pattern, like Bakuba cloth. 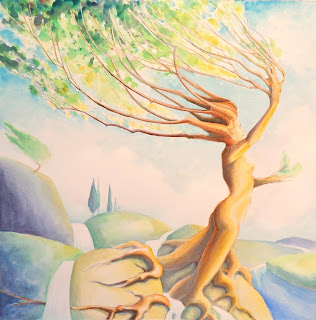 Two other images came to me and I started both about a month ago.  One is of a pollarded willow, leaning out from a hillside, like the figrehead of a ship.  I pictured her with her hair and fingers arching back behind her, like wind blown branches.  I thought of her roots bracing her against the wind, gripping the rocks.  My friend bought this one, which was finished a few weeks ago.

The other is not finished (and not shown here).  It will be closer to the traditional depiction of a dryad in form, but will be a more crowded image and painted in a different, less realistic style.  I'm looking to move my painting closer to my internal world, to get into that walled garden I've mentioned before, and I feel this painting can help.
Posted by Steve Emery at 3/24/2013 12:00:00 AM 2 comments: 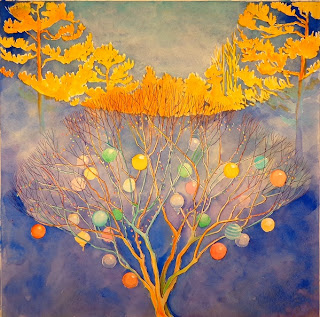 New Year's Eve is a favorite day of my year because our cul de sac has a "Winter Wander" party organized by our fabulous next-door neighbors.  About 20 of us go from house to house, sampling some tasty party food plus a wine pairing.  The street is a magical combination of personalities and caring about each other.  All of our kids, from 4 to 24 years of age, have been growing up on this street, and in this atmosphere, with lots of outdoor play and the usual drama of waxing and waning childhood friendships.  The party is laid back, we come and go throughout the evening to recharge our batteries in our quiet house, and it ends with everyone in the next-door neighbor's TV room counting down and hollering and exchanging first kisses of the year, followed by corny jokes and ending with a few of us left, talking about movies, comics, books, music, and borrowing CDs.  Last night's party was as good as any in the tradition, and I'm still glowing with the memories.

Early on the morning of the eve I had looked out one of our front windows and saw the sun gilding the tops of the loblollies in the early blue grey.  Below them was our front yard Japanese maple, my slow sculpture these last fifteen years, full of large Christmas ornaments and strings of lights.  I decided to paint it.

I did an uninhibited drawing, using pencil, and then a brush and resist.  Watercolor washes followed, to make a dawnish blueness.  Then I removed the resist (it's like magic) and did the rest of the painting to express my feelings about this day, the light, the neighbors, the good fortune which placed us here, and these people around us.  Orange and pen lines and colored pencils.  After an initial push while the ladies in my house went to Zumba, I happily continued in all the odd moments of the quiet day.  By the party I had finished it, and I took this orange warmth of former parties into this year's party and beyond.