We have spent this summer under the spell of the Muses. 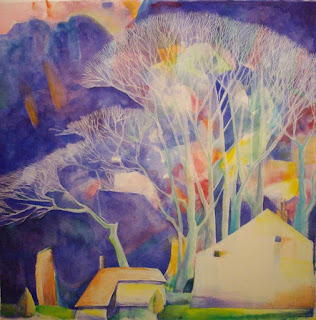 Daughter has built pressure for months, unable to dance, recovering from a sprained ankle. That pressure was finally released this last week in an intense, week long, 12 hour per day camp of song and dance, called Next Stage. There were 26 numbers performed after just a week - nearly 100 kids, from fourth grade to rising college freshmen. It was inspiring. It was her first dance in over two months - she looked great, released back into her element.

My day work has been creative and full of the satisfaction of taking the right road, regardless of the risk. And my night work has bloomed into more painting, as I've realized that I MUST make time for it. Above is this weekend's effort (finished except for final twiddling), called Home. It looks nothing like anywhere I've actually lived, but it represents some of what I feel about my home, and the home my heart seeks and wants beyond the one I can see and touch. I am living half-phased in and out of reality and dream, present, past and future. That's the story of what I'm doing at work. That's where I paint. This piece is watercolor, acrylic, and white charcoal.

And the last two months have been full of preparation for the Orange Community Players production of Joseph and the Amazing Technicolor Dreamcoat. It's an Andrew Lloyd Weber musical we have not seen or heard before this, and I'm glad we waited, so we could experience it through our local director's eyes, and performed by our local band of actors. Dearest and Oldest were both in it. We saw it twice, and I captured a lot of it with my camera the second time.

And during this time I have had many evenings alone with Youngest, and we've both really enjoyed that. Lots of conversations, joint investigations on line, a first bike expedition together, and yo yoing. I intend to keep doing more of this - it's time.

There will be a quiet spell now, with some post event blues. I hope to keep right on into this new spurt of painting, but the others around me are going to wind down somewhat, and they have to adjust to being without projects for the moment. I hope they will have new ones to look forward to soon. Oldest starts college in just over two weeks - Daughter will get her license soon. We are on the edge of changes. It has been a potent, fruitful summer.
Posted by Steve Emery at 8/02/2009 10:47:00 PM

When the muse hits... do not apply brakes, just wallow in the sweet ride. Your last line of this post - "It has been a potent, fruitful summer" - encapsulates the best life has to offer.

Of course, everything on this page busts with energy and lyricism, but did your work ever NOT?

How in the world did you get that feather-y white tree with all the colors behind it????? I love the top edge of trees and am fascinated about how you got there??

A potent fruitful summer indeed. I have not seen such a creative family since the Von Trapps! :)

Linda - I really do wish I had known you better in school. Dearest (as usual) knew what was most important. I have always been prone to distraction... Thanks so much for the encouragement.

Odd Chick - the Watercolor was done before, all those colors, then I drew the trees with a Generals (brand) white charcoal pencil (Oh I will surely be buyin' more o' them now that I've caught that bug). Then I painted more in between the branches and around and up to them for accent. Then I put in the last edge, pulling it out into newly darkened areas, to get the transition I wanted, and finer branches yet... I know EXACTLY what you mean about the top edges of trees. Sends shivers up my spine. It's one of those things that separate artists (with their odd stimulants) from people who don't get turned on by these simple things. But I think MOST people are tuned in to some special "things" - MOST people are artists (but we don't all express it - pity).

Genie - so good to see you here (always). Von Trapps! That's a tall order! And our talents tend to be scattered all over the arts, so we don't get to collaborate on any one project. Thanks for the compliment. I hope you and your creative house projects are doing well - and your painting (electronic or other). I've been enjoying your journal destruction...

Sounds like the best kind of summer one could hope for. All the best.

what a wonderful and fruitful summer your family has had, yourself included! it sounds deliciously tiring and now a time for decompressing, not always easy, with fall in the air a bit too...so many changes happening will bring up the inevitable emotional fits and starts - I don't envy you but such is growing up with children :)

this painting has the look of that lovely painting you posted last week but the trees are very you...and the white ones are absolutely gorgeous and I too wondered if that was where the white charcoal went, assuming it was the acrylic ....I have never worked with white charcoal before but this is beautiful and soft, it's perfect.

take care, hoping you are doing well with the BP now.

I love what Linda says. Isn't it nice when things are not static?

Those rites into increasing independence of my chilren are very wistful for me. College and now SG1 living in Santa Barbara. So far away. But I see how they are handling themselves so well and I feel proud, too.

Looks like you're all having a very creative summer. Projects are good. I always have two or three going on at once. I'm no artist but it's good for any soul to plan creatively and accomplish something to show for it.

There, I see the yo-yo below this post and I think that means I'm caught up with your recent posts.

All the love,
Pagan Sphinx

i was here enjoying these trees again--your branches are so incredibly delicate, they look like fine brush work rather than what i imagine charcoal would create....it is so beautiful the way you have rendered those branches no matter the medium.