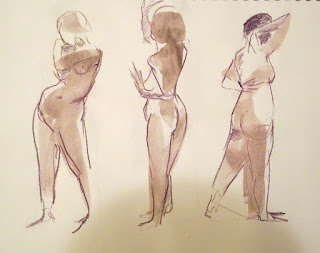 I've mentioned that I have been wrestling with the washes and lines at life drawing sessions for the last several months. It's felt like starting over, and I've left several recent sessions without a single drawing I cared to show anyone. And it hasn't bothered me - I've been quite content in the pursuit, the chase. The fact that it's been disorienting and largely a mess has pleased me, because it meant I stepped a decent distance out of my comfort zone. I'm learning something new, for me, anyway. That was the point. 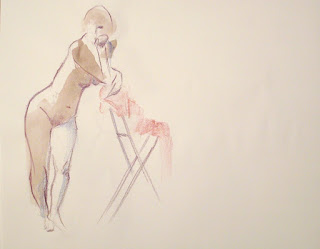 Last Monday I fell at the airport (water on the floor outside the men's room). I caught myself on a wall (bruise on my shoulder to show for it) and thought little more of it, in a rush to make my flight. Later, however, my lower back began to hurt, and it's taken the whole week to gradually get better. Last night it was still bad enough that I didn't think I could get through the whole drawing session, and I did end up leaving before the two long poses in the second hour, but I really wanted to go. 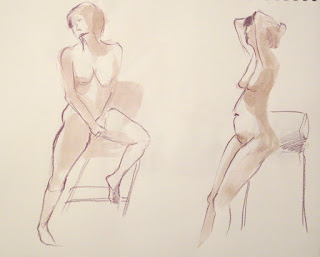 So when the first 2 minute drawings came out pretty well, and the poses (one of our best models) were unusually inspiring, I was a bit giddy. The first three drawings were all on one page (first image, above). The next two were not so good (not shown here), but then the first five minute pose was my favorite drawing of the evening (second image, above, leaning on the chair). We roared right on to the rest of the five minute poses (shown above and below, two together and one more on the page alone) - so I didn't get any opportunity to dance around the room, but I wanted to. This drawing is approaching what I'm after with this switch to wash and suggestion. 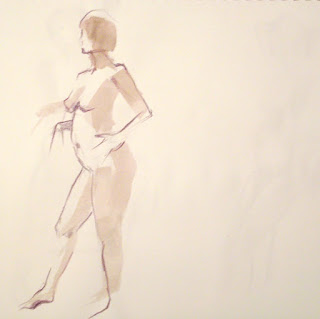 I sharpen a bit of watercolor crayon into an empty yogurt container and add water. I grab a jar from over the ArtCenter sink and fill it with water for rinsing. The drawings begin with quick, spontaneous work with a flat one inch brush in the wash - 30 seconds or less. Then I picked up a china marker, of all things, and tried to move as fast with the lines. The second image above, my favorite this evening, approaches the mix of line and shape and the balance of stated and unstated that I'm seeking. There are still things I wish were different - but this is more than half what I wanted, and that's a breakthrough. A different part of me is moving the brush, and that affects the later work with the markers. 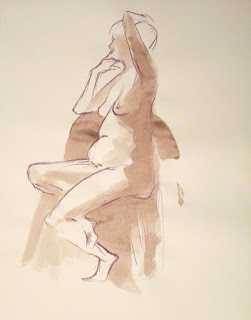 This last image is the 15 minute pose we did before the break, and before I packed up to leave because my back needed a break. The drawing was actually complete in 10 minutes, after which I stood there looking from the paper to the model and back. I finally added the second layer of wash on the underside of her upraised arm, and the light wash to the right of her navel, careful to catch the shapes of the shadows. Then I added the small splash on the far right because the composition needed a little balancing. Three touches of the brush during that last 5 minutes. I didn't see anything else I could add that would improve the drawing. There were a few things I would have liked to change, but that's not in the rules.


Some part of me has floated all day today on the drawings from yesterday. I kept losing parts of conversations today because I kept drifting back into the spot where these were created. This has approached an obsession; it is becoming even more intoxicating now that I'm getting tastes of where it might go next.


I've done some other sketches (so some relief for those of you who would like to see something beside nudes) and I'm working on the self portrait. But the figure work is the main journey at the moment, and it affects all the rest.

Your elation is so obvious, both in terms of the expressed enthusiasm and through the drawings themselves. I've been following your figure drawing as you've posted about it. These are wonderful. I love the one of the model leaning against the chair, especially.

Sorry to hear about your fall and injury. It sounds like despite it, you can't seem to quit!

The figure drawings here show that your determination to master different techniques are already showing their benefits. That last one really is very nice and I'm sure you'll be applying the skills in all sorts of new and wonderful ways when you apply them to your next paintings. Previous practice is very beneficial when it comes time to make the quick decisions required by watercolor.

I'm sorry to hear about your fall and do hope you're feeling better.