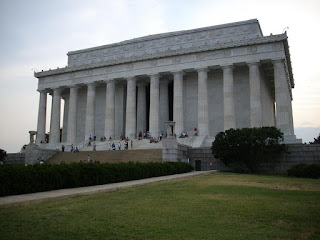 I walked from Georgetown to Virginia Avenue, and back towards the ever present Washington Monument. Then, to my right, I saw the Lincoln Memorial. I knew it was in the totally wrong direction for my walk back to the hotel, and that it was farther away than it looked, but I had to go pay my respects.

In the last block before the green circle that contains America’s finest nod to Greek architecture, I passed between many baseball diamonds. There, within a homerun hit of the Memorial, were teams of every race, ethnicity, and socio-economic background, playing America’s game. Up the hill from those softball teams is that famous statue of our saddest and possibly our most revered President, flanked by two of his most famous orations, both concentrated on the subject that burned in his heart every hour of his Presidency: the preservation of the union and the end of the conflict that made combatants and bitter enemies of the ancestors of some of the players outside on those baseball diamonds. 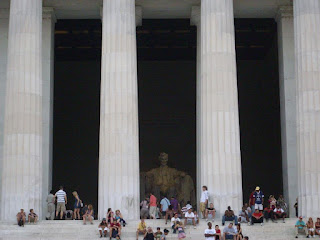 I read both of those speeches, and chuckled at the part of the Gettysburg Address where he says these words will not be remembered. And what if we were given an oration today like his Second Inaugural Address? Would we resonate with the ringing English? Would we be swayed by his quiet disbelief that some men feel entitled to get their bread by “the sweat of another man’s face”? Would we be moved by the humble submission to the will of God, and the determination to see the terrible thing through to the end as justice and the Almighty might require? I wonder. 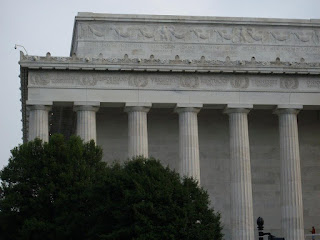 I photographed where North Carolina’s stone is set on the top. We’re on the side, just around from the front. When I looked at the front of the Memorial, as I was leaving to walk back along the Mall and up 19 Street, back to Dupont Circle, I noticed that the stones are laid in the order of statehood, and for the 13 Colonies this meant the order of their ratification of the Constitution. I laughed, realizing that NC initially refused to ratify the document, causing them to be one of the last of the 13 to join, and losing them a spot on the front of the Memorial. But I grinned when I remembered why they refused. They would not agree until it included the Bill of Rights. I’m proud of my adopted home state, where I’ve lived nearly two thirds of my life - and I find it amusing that North Carolina shares that stone with the only other state where I’ve lived, the state of my birth, New York. 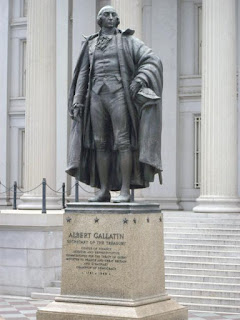 In New York I lived from age six to seventeen in the town of Gallatin, named for a French financier who helped get the new United States off to a good financial start. I was delighted, on my earlier walk in DC, to see this statue of Gallatin in a place of honor in front of the Treasury Department. The town in New York is too small to make most maps - it had one major intersection (a “T” with one stop sign) and an interchange on the Taconic State Parkway, where the sign mentions the road (Jackson Corners Rd) but not the town.
Posted by Steve Emery at 7/28/2009 09:12:00 PM

thanks for the tour of DC...it was fun seeing things from your perspective, and this is especially fascinating...