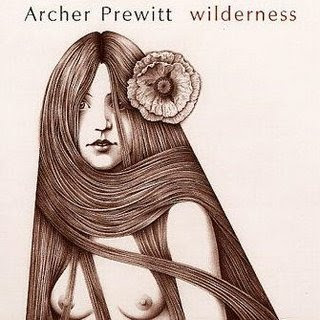 We are greatly tempted in record and CD stores - especially if second hand, when the prices seem irresistible.

So on the most recent trip I came back with:
Way to Blue - by Nick Drake
Liz Phair - by Liz Phair (had forgotten I was looking for this one - pleasant surprise)
Chutes Too Narrow - by the Shins (I have another album of theirs I haven't opened yet - I got into them because Lisa turned me on to the soundtrack to Garden State - I'll be looking for some Frou Frou for the same reason...)
Wilderness - by Archer Prewitt (no idea, but the album art stopped me for the third time and so this time I just went ahead and bought it - no idea if it's any good at all. The girl on the cover is a bird, to me - it's a very strong impression that I can't shake and which fascinates. Something about the overall shape, the shape of the face within the hair (and something about that sweep of hair across her throat), her bowed mouth, and the pert symmetry of the breasts makes her more bird than if they had drawn a robin. I can't explain it or shake it.)
Ocean Avenue - by Yellowcard (was looking for this one)
Dawn Escapes - by Falling Up (not the one of theirs I was looking for, but it was only a dollar - probably not good considering that price...)
EP - a short demo by Verona Grove (only four songs)
Boys for Pele - by Tori Amos (bizarre cover photos - and inside, too)
1999 - by Prince (it's got Little Red Corvette - gotta hear the rest - and I think Prince did the cover art)
The Crane Wife - by The Decembrists (they keep coming up in "you might also like..." lists - but little samples aren't telling me much)

Daughter and Dearest came back with some CDs, as well, filling in some Billy Joel we only have on tape or record (Turnstiles is the treasure in that group - I still think "Summer, Highland Falls" is possibly his most poetic lyric, and one of his best assembled numbers, period - and it will be wonderful to listen to The Stranger all the way through again - I came of age with that album in the background, along with ELO and several other late 70's groups), an earlier Elton John album (Captain Fantastic), a John McCutcheon we did not have yet, some Tokyo Rose, and Mellon Collie and the Infinite Sadness by The Smashing Pumpkins.

Plus an Alanis Morissette album (So-called Chaos), and the second Lily Allen Album (It's Not Me, It's You) both lent to me by Daughter (look what you started, Alex - thanks - and let us know if you want to borrow any).

Nearly half a gig of music files on my studio laptop.

Unlike my usual hoarding and nibbling, I am loading the entire great heap on at once and I intend to be a musical glutton for weeks. I am going to get painting again and achieve some balance with this work project (which will now continue in high gear, instead of warp speed, for the next year or more).

Daughter just walked out of here with the entire stack - so we'll compare notes later...

Just back from three days in VA, and not much left of me. Tired in a thoroughly physical and pleasant way. More on the trip later. But I can comment here that the Yellowcard, the Liz Phair, and the Archer Prewitt are all turning out to be the favorites. Tori Amos, Alanis, and Nick Drake are also working out well. Nothing yet that I've wanted to just skip.

I found that cover facinating, too. I would have bought for the art work, too. :-)

But .. do let us know if the CD was good

i love the cover and when i read you thought "she" was a bird, i knew you meant her....one of my secrets i have decided to divulge is i am a silence freak and never ever listen to music...so i am a dud here ... 10 years ago i was the opposite so perhaps i will change my mind with something you have here and begin to open my ears again!

i am thrilled you are slowing down and can be home, mow the lawn and paint and drown your sorrows,if you have any, in music....you need some time..

Ah! Back to normalcy! And doing so with a soundtrack is always inspiring! What a lovely eclectic collection. A lot of my faves there :)

Such yummy musical choices. I love taking music out of the library and uploading it. I just got some Death Cab for Cutie, Stars (You might like some of their work), Tom Waits and Verdi yesterday.

Can I just tell you that at the end of this post, I really got a chuckle out of the "And mow the lawn."

Gypsy - it IS good, and that is a pleasant surprise. Actually, I suspected it was good - I'm surprised I like it. Lots of good stuff out there that I just don't like (it doesn't do anything for me).

Linda - You've never mentioned music, so I had a feeling maybe you didn't listen to it. I'm not sure anything in this crowd of CDs would be a good way back into music...

Genie - Soundtracks. Maybe because we are so into musicals in this house, and have seen so many movies with lush scores, AND because everyone in the house is into music in some way, we all have soundtracks, even when there isn't anything for anyone else to hear. They play in our heads. This group of CDs has been terrific for painting, etc. - except Smashing Pumpkins. I had to remove that one - it didn't play well with the others.

Lisa - I have to look into Stars. I looked for Death Cab for Cutie - they're on my list. Verdi. That was fun mixed in with the other three. What work(s) by Verdi? and it is sad (and funny) that mowing the lawn made my list of pleasures. That's just wrong.

Yes, definitely leave the lawn mowing til last. Listening to music and painting are usually much more important. The grass will always grow but the inspirations dissipate if not acted upon.

Susan - I agree! And the lawn looks worse today than yesterday. But my blank white page is part of the way to another image, and I feel past the minor blockage I accumulated in all the left brain work of the last month. The lovely thing is that everyone in my house and most of my neighbors would wholeheartedly agree with these priorities, too. I'm blessed in my family and neighbors.