I'm back... for now. I'm pretty wiped out, and I've had two days of post event depression, but I'm getting over that. 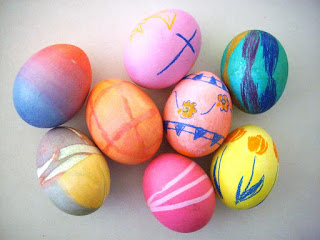 We colored Easter eggs last week. I'm not usually home for this, but working on my big project from home, I took a short break, shared a set of wax pencils, and did a few eggs. These are some of the completed eggs, before I cracked some for egg salad Sunday. My favorite of mine is the yellow one with the red tulips. But my favorite egg is the Hundertwassesque one with the browns, greens yellows, and red edges (lower left), done by our youngest, using rubber bands as a resist, and dipping the egg carefully in sections into the different dyes. I wish I'd colored that egg.

The project I've been working on for my day job, which is fascinating, but also under tremendous time pressure, kept me occupied nearly every waking hour for the last five weeks. It was a vast exercise in imagination and analysis, both, and I enjoyed it. It also exhausted me and pushed me into some odd creative places.

One day I took a walk with my Dearest in the brilliant late golden clarity following several days of storms. I was reaching the climax of the project, and I was two days behind schedule. I was in the mental equivalent of a runner's high, and elation overtook me. I was aglow with dreamy visions, and the real world around me took on added dimension. The light on spring trees, against brilliant late day blue, and the glory and grace of the tree bones in silhouette, made me literally hop and dance in the street. I wrote down ideas for seven different paintings on that walk, all on the back of my life drawing ticket, the only piece of paper I had with me. I haven't looked back at those ideas yet.

On Easter Sunday, with the project's first phase over, and my work completed and shipped off to the next person in the chain, I tried to relax. Everyone else was at church or out playing, and I was alone in the house. Morning light flooded through the windows and intoxicated me with peace and languor. I took the longest and most sensuous shower I've had in years, soaping up and rinsing repeatedly, shampooing my hair three times, breathing in the different fragrances. I curled and cozied in the warm stream, and closed my eyes and still saw and felt the sun pouring in. After the shower I got out a thirty year old English Leather talc that I have kept for such moments, and I briskly rubbed it all over me, deeply enjoying the old familiar scent, and the memories of my late teen years which come with it. For the remainder of the day I kept catching hints of the essence, and they made me smile and relax all over again.

In the middle of the project I did five 18 hour days in a row, where I barely kept ahead of the team I was leading. Each day we worked eight hours on the project, spinning structures and discussing alternatives, then I would work for ten hours alone, into the night and again in the early morning, preparing for the next day's session. It was exhilarating and as much fun as I've had at work, but at the end of it I was dangerously close to losing perspective, and of being unable to stop. So I slept late the following Saturday, drank some tequila to reboot my mind, took long walks and talked with my Dearest and with other members of my family, and painted. It was a productive painting time, though it was so brief. But that's another post (or two).

The first six CD Covers have found their owners (or vice versa) and I will be delivering them shortly. That means the last three can also be posted for "first come, first serve" requests.
Posted by Steve Emery at 4/12/2009 09:05:00 PM

Love your blog!
I have to confess. I am getting attached to the hand puppet in the photo. Can you tell me where I can adopt one?
Linda

Glad to see you've made it back safely. Enjoy the peace and quiet exhibited by the eggs :-)

Glad you are back. Just in time for tulips.

It's hard to strike that balance when pressure calls. Well done Steve.
June in Oz

welcome back .. and nice eggs!

It's good to have you back!

What a whirlwind you went through! I am glad you took the time amidst this work overload to decompress.

I love the eggs and my favorite is your youngest's. I hope you didn't crack that one :)

we've missed you!! so glad you feel your big project was a success and i hope you are feeling more rested everyday. things in blogworld are just not the same without you!!

so happy to have you back in blogland~it seems a long time since you last posted but that may be me..I love the hundertwasser egg myself, lol.

hoping for you some peace and quiet.

Linda S Socha - welcome. The puppets are part of me... You should make some of you. You can see more, including Faw, who is nearly thirty years old, at: http://www.sjemery.com/silly

Susan - it's good to be back, and thanks.

Summer - Thanks, and yes, we have three red tulips in our gardens, and a lot of little pink species tulips which seem to multiply and spread.

June - I'm sure you had plenty of that, too, in journalism. I'm far from done, but through the initial rush at least.

Genie - Thanks! And youngest will have to crack that one (if anyone does). They can be dried out...

Odd chick - Thanks so much, and I am over the worst of the post event slump. Too much still to do, but I am achieving some kind of balance again.

Linda - Many thanks, dear lady, and I will try to get some peace.

I took this evening off, spent time with my Dearest, made a nice dinner, and then we watched Mr, Magorium's Wonder Emporium. Much in that movie awakens my urge to paint the inside of my heart.

I've missed you! I'm so excited for you that work has offered an opportunity to stretch in a different direction, but selfishly, I've missed your art.

Now, as for those eggs. They're so pretty and I agree, that one done by your youngest is just so cool!