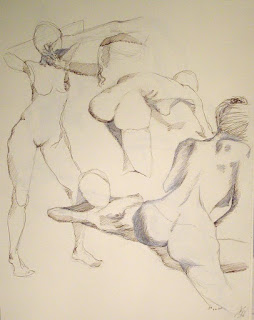 We had two models show up tonight - they both had confirmations. But only one had a check cut for posing, and she's the one who stayed. I was happy with the result, because though both are good, I wanted a draw a female tonight (we drew a male last week) and her poses are particulrly good. She's also an artist, and works hard to give us more interesting angles and foreshortening, etc. She's in her sixties or early seventies, I think, and she is beautiful. She has a long graceful torso, which I emphasized more in the second and third pages shown here. I don't see the wrinkles after the first five minutes or so - her kind of beauty is NOT skin deep; it's under the skin.

This evening I tried a different way of drawing - with a pencil, as I do when I lay out a painting. And no shading except with lines and hatch. I also decided to lay the drawings on top of or next to each other, and work a little smaller and faster. The results pleased me, and I found I was doing a better job capturing what it is about the poses and the model - the particular grace or beauty of a particular moment as I saw it before me. I think the pastels are too blunt to catch the subtlety I see in the countours. 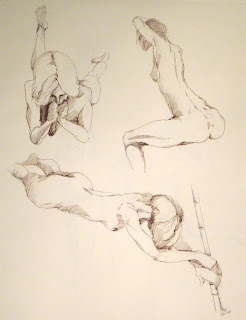 When I got them home I got out the fountain pen and worked them over correcting things and emphasizing things. A little white charcoal on the first one sets some of the figures apart from others, and makes some of the darks recede because it makes them a cool gray instead of the warm dark of the brown fountain pen ink. These are all 18 x 24 inches - in a Strathmore drawing pad. 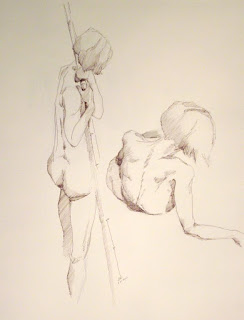 I like these. I have a long way to go with this, but this feels like a path I want to pursue further in later sessions. I feel like these break out of the rut I keep trying to get out of - the 19 year old in art school who couldn't figure out how to use the conte crayons.

The first of these is five 2 minute poses. Later at home I spent no more than two or three minutes on each of these, as well. The next two drawings are composed of ten minute poses. The drawing of her back in the third drawing, lower right, was held about 15 minutes, because she was doing fine and we kept asking for a minute more... From all angles I think we all felt it was the best pose of the evening.

You did some really great drawings with some difficult poses. You do your best. DO IT for all of us who have no opportunity, in small towns, with small minds!

It's good you were able to capture so much of the vibrancy of her earlier poses. I'm glad to know there are some older models who are willing to do that kind of work for a class. Positioning for longer poses has to be very carefully done to keep the angles interesting yet not have to release because of muscle stress. You did a wonderful job with all of these.

Nice work all around, but scrolling through when I first got here, I immediately anchored into that back drawing - it's exquisite, if you'll pardon my hyperbole. As impressionism suggests reality, so your line work suggests something nearly photographic.

BTW, I just spent some time at an M. C. Escher show, and was amazed at how much you look like him! :)

steve, these are gorgeous, fascinating how she was able to do some of these....i couldn't stay still to model to save my life...i appreciated you explained how you did these because i was trying to figure them out the other night when i stopped in when you first posted... i love the top one, it's worthy of framing, in my not so humble opinion.

lovely work, as always, the figure seems to really speak to something inside you and draw it out...not to be taken so literally but i guess that's what i do mean. :)

That you can get even better than this at figure drawing is amazing to one who can hardly draw a straight line.

It sounds like you are learning a lot and enjoying this process!