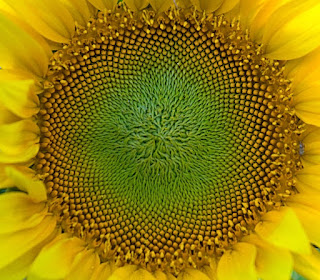 I was crawling through wooden tunnels with curving walls, which branched repeatedly, splitting to move inward or outward, easy to tell by the way the tunnel shrank or enlarged. Like moving through hollow seeds in a huge sunflower center, following a fibonacci series in or out.

Oldest was with me, just ahead of me, aged eight or nine. He was silent, but radiating excitement that I was finally coming with him to the heart of this place he knew so well. The center, when we arrived, was a five sided chamber, lit as if with reflected sunset light, though there were no openings except the tunnel mouths. The entire structure seemed to be rotating slowly, geologically slowly, like the rotation of the planet beneath us, but separate and different. It felt like the chamber of a heart, like the center of the earth.

Oldest was sixteen in the next moment, we were at home, and he was telling me that they had torn down the structure, hauling away all the weathered wood. Grief and rage rose off his skin like steam. "There were other ways to move through the tunnels, which got to other places they didn't know about," he said. "It was an angel." I wanted to weep.
Posted by Steve Emery at 1/12/2010 09:37:00 PM

I love this kind of dream. It makes perfect sense, but wouldn't if it didn't. I hope the places are not lost.

Nature is sacred and patient. She waits for us to remember her blessings.

That was a very precious dream.

thank you for sharing such a moving dream, a moment shared between you and your son...

i caught my breath at his words to you..
♥

This made a lump form in my throat. Oh the beauty, and the loss of it. Have you seen Avatar? Your dream reminded of the feelings I got when watching that stunning movie.