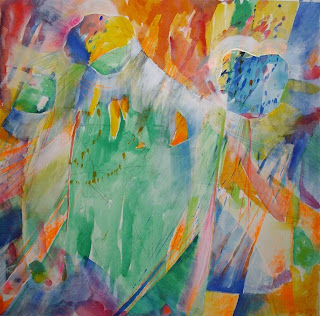 What little time I've had in the evenings has been spent throwing paint around. I've completed two mixed media abstracts that capture some of the power that color holds for me. This one is 19 x 19 - the one I'll post tomorrow or Saturday is 18 x 24. I let go and literally threw paint in the early stages of this one. From there it was a joy to just keep turning up the color volume, the contrasts, and the visual motion in these. I was not in doubt about what I wanted to do next on this one.

Click on the image to see a much larger version. Both this one and the next suffer serious loss of subtlety in the photos. The camera loses all the overlapping layers, especially in the next one, and the colors are flattened. It's one reason why originals are so much better than reproductions. But you can get the general idea and about 90% of the color intensity in this photo.

What I WANT is to paint this freely, but not abstracts. I have to somehow bring this level of freedom (and greater freedom yet - I'm still not letting go enough) to paintings with subjects. That's what I want to paint. Maybe the next two won't stay abstract... 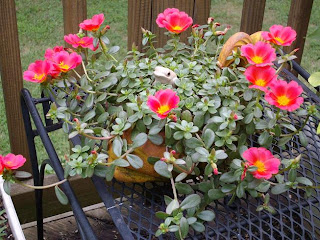 When I visit mon ami Senor Pesce in the winter, it is easier to see his eyes and mouth. In the summer, we converse through the screen of his lush purslane hair. Here you can barely see a little of his tail behind me.

As you might imagine, grenouille et poisson have much in common. Especially if neither likes the water. Steve's oldest, when he was tres petit, used to call these flowers buttercup coppers. La famille still does.
Posted by Steve Emery at 8/21/2008 09:48:00 PM

I like the colors in the 19x19. Not sure if I can describe my feeling but it is definitely a positive emotion.

I agree with MathMan. The colors and perhaps the organic shapes do creative a positive feeling.

I love that your son called the flowers buttercup coppers. They're just bursting with color, too.

ah steve ~ yummy!!! I love it and even though I have to look at it through my monitor, I can see all that luscious color working off each other....and THAT orange....(swoon) so, suffice to say, I love it and can't wait to see the next installment! I think you have begun a new journey in your art.

Such a joy to see the abstract - the shapes and color and how they bring the eye round and round to look deeper and deeper. can't wait to see more

MathMan - thanks, and I'm glad the positive or happy feelings come across - they're intentional.

DCup - thanks, and these are my favorite color of portulaca, in part because of that memory.

Linda - thanks, and I owe a lot of this journey's beginning to you. I'm looking to find more ways to break out, let go.

Odd Chick - thanks, and I try to create a sense of movement in my pieces - even more so in the next one, which I will probably post tomorrow.

I feel the same way as the others. What's cool is that the joy isn't ostentatious like a bad ad, but subtle. The colors definitely compliment each other, the whole seems 'brighter' emotionally that each individual block of color.

Randal - thanks - the way the colors act on each other to make the whole thing brighter and more intense is what I'm after, so I'm glad it seems to work. I'm eager to see what you think of my next one.

Those colors are amazing to the eye and calming to the spirit.

I'm not a good art critic, really.
I just go by how my eye and my soul feel when I look at a work of art.