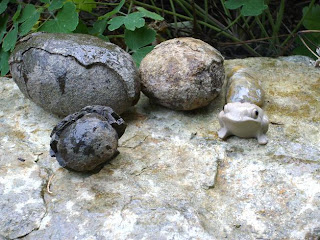 Steve is too laid back and mellow from his artistic day to post. And besides which, he posted once sans moi, so I shall now balance the scales by posting without him.

Steve and oldest son loved to collect stones (Steve would call them rocks with his tous tous charmant accent Americain) when they were building the stone walls around the gardens. Here I sit with some small pillow basalts. Steve says these were formed in volcanic eruptions, where the lava bubbled up into a sea or large lake, and cooled quickly on the outside and more slowly on the inside, making rounded shapes and layers like an onion. The area northeast of Hillsborough, around Bahama and Rougemont (love that name) have many veins and layers of this kind of stone, and construction often brings them to light. Maybe the Red Mountain is a sleeping volcano? Might it wake one day and we'll be like Pompeii, frozen forever with a fork of fois gras or salade nicoise only part way to our mouths - able to smell it forever but unable to consummate the gustatory moment? And Jean Paul Sartre thought he knew what hell was? 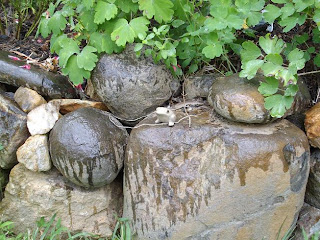 Steve also said that he and older son once found a pillow basalt as big as their van. They couldn't bring it home, so they have no proof, and I am inclined to think it a fish story as you Americans call it. In this photo I am sitting by some larger basalts, but plainly much smaller than a minivan. Steve says these are hard to use in stone walls, because they often have no flat sides. He says it's like stacking bowling balls. (Why ever would anyone try to do that? Is it perhaps another pointless American pastime such as the hopping on pogo sticks for the longest time possible, or the name calling during the American political season?)

I am entertained and educated by your cleverness!
"A clever, imagination, humorous request can open closed doors and closed minds - Percy Ross."

you guys have it all

I love those pillow basalts. I've been a rock collector since way back, but I don't have any of those. Merci, Msr. G for explaining how they're made. Steve can be glad to know the blog is safe in your hands when he's unable to post.

Odd Chick - Thanks! I appreciate the compliment. I hope Grenouille perhaps finds his way into places I might not venture...

DCup - I have a feeling that now Grenouille has found his voice we may not be able to put the genie back in the bottle...