The Other Side of Egon Schiele 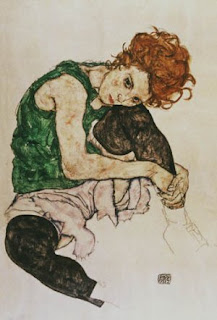 Another favorite artist, whose work I looked for while on my grazing day in Chapel Hill, is Egon Schiele. Most people, if they know his work at all, know the portrait shown here. Much of his work, however, due to the models he used (most were prostitutes) has a sad, exhibitionist feeling. There are dozens of paintings and sketches that I would not include here. 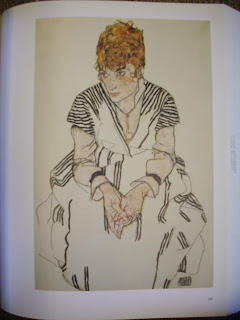 Often the figures are also emaciated, due to the difficult times in Germany and Austria when they were painted. He lived hard, played hard, was depressed in a very depressed era, and it shows in his disturbing collection of work, particularly the self portaits. The figures seem exhausted, starved, used up, jaded, lost. Some look like concentration camp escapees. Fingers are often knotted together, in convulsed contrast to the resigned exhaustion showing in so many of the faces. 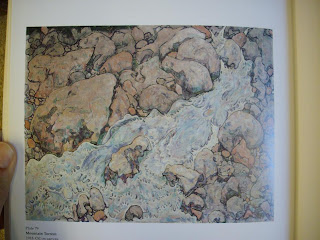 But he also created some unique landscapes, like this one of a mountain rapids. This is an oil painting - most of his work is in charcoal and gouache, an opaque watercolor medium that is more often used for sketches than for more "serious" artwork. His handling of the gouache, and his touch on the paper, are unique, sensitive, and, like Matisse, able to capture a lot with very little. Even this oil, however, shows his love for line and contour. He had to caress the edges of every stone, every wavelet. Often his drawings of figures have this same sense of touch, so they are intimate and intensely, almost embarrassingly personal. Erotic. For instance, being heterosexual, myself, I find his self portraits and portraits of men distressingly sensuous. 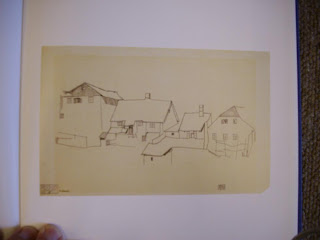 His sketches of buildings, towns, farms, though infrequent (he preferred to draw the human form) also show his gift for the sense of touch, and for contour. They look as if he put his charcoal or pen on the paper and never lifted it. Everything is folded and flip flopped this way and that by his curious, exploring line as it ran along roof edges and along walls. 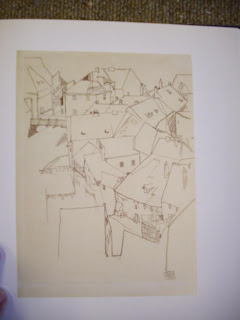 This style seems particularly appropriate for capturing the accumulated piles of steeply pitches roofs that make up the towns he drew. Lines are also used for the shadows, and his edgy, nervous touch is expressed in the very quality of the marks. If you look for more of his work, you'll find townscapes, where he used gouache to fill in these sketches. The brush strokes also show the man's personality, like the textured surfaces of paintings by Vincent Van Gogh. 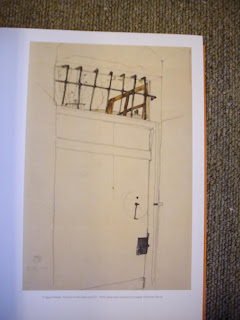 Even this drawing from the inside of his room is powerful to me. I apologize for the quality of this image, but maybe you can see what drew me to take a photo of it. I would also have been fascinated to sketch these rectangles, with their interesting porportions and divisions. The circle created by the swinging hook would have seduced me to get out a pencil, as well. But the most notable thing about this drawing, to me, is that the only color is in the pitifully tiny scrap of outside which is visible through the transom window. The bars over the transom finish this image's emotional setting. 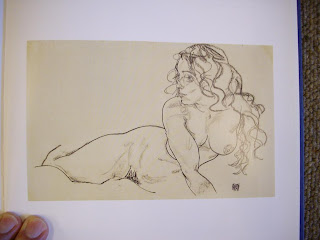 Finally, I was struck by the simple, sensitive beauty of this nude. There is a girlish innocence captured in this sketch - something unusual for Schiele, who tends more often to capture the hard bony edges and hard used expressions of tired female bodies. So often his subjects are either looking hard at the viewer, or they have thousand mile stares. Here the young woman seems to be looking, without sexual intent, at someone outside the interaction of the artist and his subject. There is a hint of other life, positive life. Sadly that might be what makes this sketch stand out of Egon Schiele's beautifully drawn, lost world. 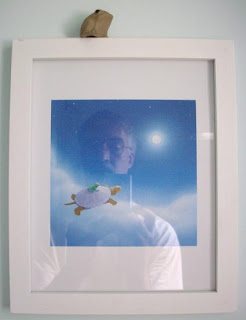 Often the best things have layers. Wedding cakes, onions, lasagna, successful chicken farms... (pardonne moi)... It is enticing to find depths and overlapping images, ideas, sounds. Things reflect, reference, allude, parallel, echo, and cause deja vu. It is frolic for the mind. So Etienne et moi post this photo and allow you the pleasure of deciding meanings for the layers. What is going on here?
Posted by Steve Emery at 8/31/2008 05:24:00 PM

I have never seen work by Schiele before (that I am aware of). I like the lack of color in the works you show here. The lines make the statement, I guess.

The layered photo is intriguing. I keep looking for more things there.

It appears that someone took photos of actual Shiele sketches they own or have access to?

I posted one of this nudes sometime back when I began blogging and started the friday nudes thing. I'll have to find it and send you a link.

I love the image of the tiny frog riding on the back of the sea turtle. We have some cool art on the walls here at home; I should take some photos of it.

Your blog reminds me of my youth, when in 7th and 8th grade we went to the Art Institute [of Chicago] once a month for field trips related to the literature we were reading.

I, like Dcup, was unaware of Schiele. Some of the features of that first portrait remind me of DCup when we first met, of her hair was more of a cherry color.

I hadn't thought of Schiele's work in a long time and I thank you for posting some of his work. Probably the most remarkable aspect of his model drawings was the way he was able to capture the hand gestures. That's a technically very difficult thing to do.

Thank you for sharing this artist's work, steve. I love the nude, the innocence in the air of it...

and also really like the frog on the flying turtle with that strange man reflected back... ;)

Thanks, everyone, for the comments. Just got back from three days on the other coast - lots of time on airplanes and in airports... Very tired. Ideas for several more paintings in my head... To bed early tonight.