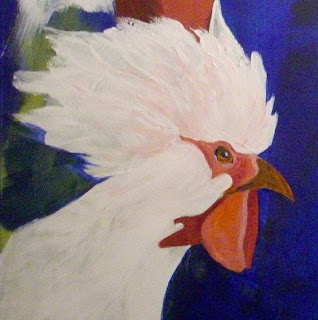 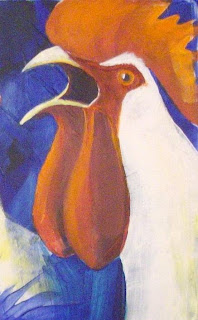 I have had a thing about chickens, more of a choice than the sheep have been, that goes back a long way. If I sit down with a child to paint at a kitchen table, I am likely to end up with a rooster. The Polish roster, above, is from my imagination, but the others here are based on photos. Chickens look lots of different ways. 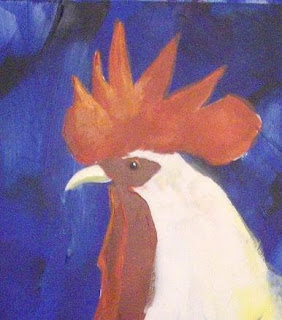 These are parts of a painting I've been working on, and have decided to quit. I think they will make four fabulous CD covers for my own mixed compilations, and that's how it will be. Like Grizzlies in Central Park, which also graces three CDs, some paintings just don't work out. No sweat - they can be enjoyed in other ways. 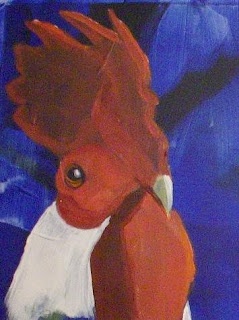 * snatch I recall from a song sung by an odd folk group at the old Ninth Street Bakery in Durham, NC - the REALLY old location, not where Elmo's Diner is now... I really wish I could remember the rest of that song. The chickens got away with more and more outrageous things. 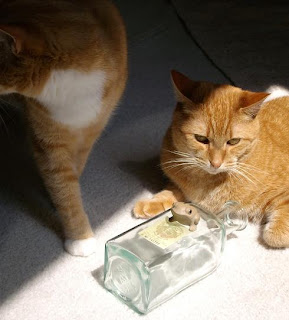 There is not enough light in the winter, and already the people of this house are acting strangely. The cats spend more time in the sun spots, sleeping or blinking, soaking it up like a sponge. One cat, Mademoiselle Santolina, in this photo with the white bib, spends more time sleeping on top of Moomin Light's monitor, where it is warmer than the rest of the house. (Sometimes she falls off, tumbling over the keyboard, the desk chair and onto the floor. After a few moments of blinking surprise, she walks off with her savoir faire intact - only a cat can do this. If un grenouille were to tumble petite buttocks over broad chin during a clumsy hop, he would not recover - he would sulk and look as if he had swallowed a beetle shined with shoe polish.) The people wear faces that say "Je regrette," as they look towards the setting sun, or view the clock and cluck their tongues when the sun dips behind the forest. The boxes of light will be brought from storage, and set up for las femmes of this house, to extend their time for absorbing photons. Steve says these boxes come all the way from Alaska, where they know about cold and darkness.

But for now the air of desperation is kept at bay when the sun is still summery bright. Window seats are usually occupied. Strolls are timed to catch the sun's last kiss. It may be hot, but it is barely light enough for some.

My first thought when I saw the chickens, was Pictures at an Exhibition, you know the Chicks in their shells. Ultimately, I find you art thought provoking.

I love the rooster paintings.

The day length is waning. I can feel it as I drive home from work each day. The shadows are a little longer, the natural sounds a little more urgent.

Like the cats, I lay down today and took a nap with the sun just starting to slant over me as I slept. It was really restful.

Thanks, guys. I really enjoy your comments, and it's extra fun to see them together.

The last two days have been cloudy here - stormy. I found the loss of sunlight made me feel like I'd been robbed. Just a little hint that the year is turning.

I LOVE ROOSTERS ! These are really expressive!