Our daughter recently put forward her "mushroom theory of campaign signs." Once they pop up on a street, they spread. Overnight two Obama signs sprouted on two neighboring lawns. They went unchallenged for several days, until during the following rainy Saturday (mushrooms love damp conditions) a McCain/Palin sign and a McCrory sign (candidate for NC Governor) popped up on another lawn. Daughter was happy to see the diversity on our street, and the confirmation of her mushroom theory. I was happy to see the signs spreading their Democratic or Republican spores from the expected yards, as I like to think I understand my neighbors' points of view. On our street we have a nearly miraculous harmony, and nearly every house has children in it. We get along amazingly well, and look after each others kids, cats, dogs, etc. But we amicably agree and disagree on politics, and we have just about every part of the spectrum, except the extremes. 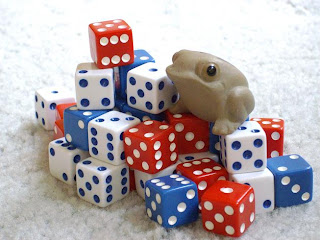 Voila! This illustration is from the start of my performance art titled "The American Presidential Election." I roll the dice, colored for Republicans, Democrats and Independents, off a table. I lose some of the dice between the floor boards. I total the results, with some dice counting more than others. The independent dice are left until the end, for tension. Le news reports the results too soon, and incorrectly, and this causes late dice to materialize to change the result. And for the finis, when the vote is all counted, still we are uncertain who has won. Et encore, et encore.

I welcome your critique.

I think your way of determining the election outcome is as reliable as any other.

And your daughter's mushroom theory is perfect.

sounds perfection to me....I am beyond an opinion about the election at this point...it is feeling pointless so roll, throw, toss, tip those cubes any old way you want, dear little froggie.

Grenouille really ought to seek out a career as a political strategist!

Madames, I believe above all that we should have a good time while we determine the outcome. Voila, did not the band aboard the Titanic play until the very end? And what if we do not sink, but instead we are rescued? Would it not be a pity to have spent time in the wringing of the hands?

I yet have hope that the running mate will be allowed to speak more for herself, and that America will be attentive. Surely not the majority of us are fools, non? And enough of the intelligent will vote, oui? Hope.

Sponge-Robb offered me an Obama/Biden sign Sunday. When I declined, he offered to go get me a McCain/Palin sign. (I declined that one as well.) In the end, what he wanted most was the reassurance that I was planning to participate.

I think that speaks volumes for our street and the way we all look out for each other.

I still haven't made up my mind which of the choices will result in the least amount of long-term damage to my country, and even the libertarians have betrayed me. Unfortunately, I can not see hope in either direction.

But I'm still looking for it and, perhaps if I look hard enough, I might catch a glimpse of it.

Alex - Daughter today noted with displeasure the two additional Obama signs on our court. One sign would have been perfect, balancing the neighborhood, but two signs upset the parity again. As you can see, we're trying to have some fun with it.

This house cannot vote for McCain because of his caprices, which we expect would get worse in office - and would be the very worst if he were suddenly no longer in office...

But like you, we also will not put up a sign. That would imply more than our votes - it would imply some kind of positive enthusiasm, and we don't have that.

And like you, I admire the attitude on our amazing street, like Sponge Robb's, where it's more about the process and being engaged than it is about demanding a particular point of view.

I have volunteered for Obama during the Primary the only vote that matters for me in Utah (the reddest state in the nation). But I did turn my neighborhood into "Block Obama." I'm passionately VOTING, BY MAIL AND EARLY, FOR OBAMA. I love your daughter's theory.