I'm going to start at the end of our recent family trip. The last time we went to Washington DC we had learned about an extension of the Air and Space Museum out at Dulles Airport, but we didn't get to see it then. It's called the Steven F. Udvar-Hazy Center. The website doesn't begin to do it justice. 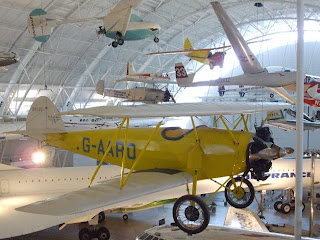 This time, on our last day, we made it a point to visit. We were there for three hours, and I think our youngest and I, who spent the time together, could have spent several days. We bought the book that goes with it, and I regret that it doesn't go over every single aircraft in the place. I've left a lot of these photos larger than usual - click to see the full size. 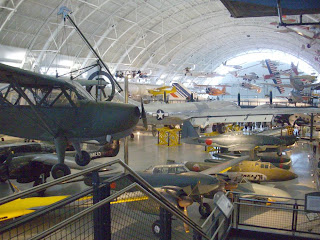 First of all, it's an enormous hangar - one of the largest built. Then it's brilliantly arranged, so the planes are accessible and also very dramatically displayed. I took panorama after panorama of the place, trying to capture the breathtaking jumble of craft above us and around us. Some of the planes are large, like the Blackbird stealth jet, the Concorde, the Boeing 707, and the B-29 bomber. There are craft from the last two World Wars, including German, Japanese and French fighters and bombers. They have helicopters and autogyros (attempts in the 40s and 50s to create planes for the family to use from their garage). The Space Shuttle Enterprise is the centerpiece of the large gallery devoted to rockets, missiles, and space missions (a separate short post coming on that). 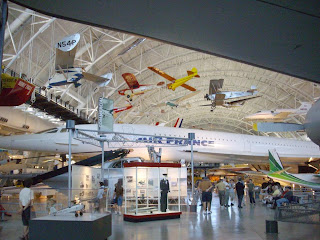 The elevated walkways create dramatic scenes, and the ability to look at some craft from all sides, including from above. The inside of the building itself is dramatic, because of its size and the way the construction is all open to view. Everything is well labeled, engagingly described, and most of the vehicles have fascinating stories about their design, their use, their flights, or their inventors. I never imagined there were so many different ways people have created to fly. 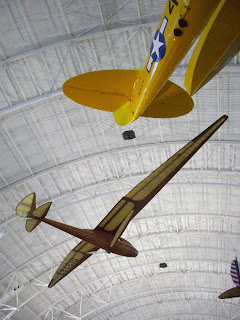 And some of the craft are so beautiful they are like birds or sculptures. Several of the gliders were completely made of varnished woods and cloth, and they looked like antiques from another time (which, I suppose, they are). The biplanes, as well, are so obviously hand made and lovingly finished. One was completely made of white cloth, like a giant ribbed kite - even the propellers were stretched cloth. In the center of it was an outlandish looking Victorian engine. 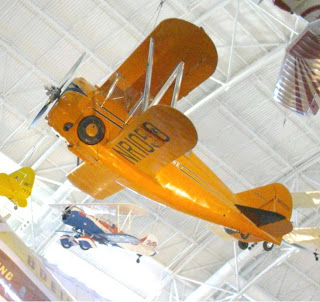 There was even one stout stunt biplane in a color very close to my favorite orange, and I was aware of it's location around me the entire time we were there. It was my aeronautical muse for the day.

I want to go back. I didn't get enough. That's a great way to end a trip. 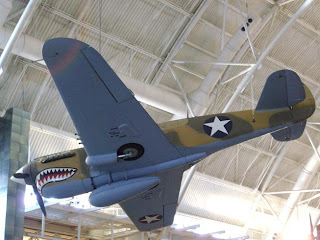 I looked at Etienne's photos from the trip. This plane made me think of mon ami the shark. Don't let the grande teeth frighten you, the plane was on our side, and mon ami is also a friendly. 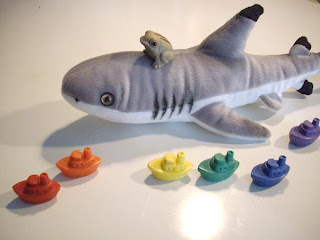 But rather than flying I prefer to cruise just above the surface of the water. Oui, I am fascinated with the light on it, and boats upon it, and fish in it. The proper place for a grenouille - pondering above it all.
Posted by Steve Emery at 9/18/2008 09:58:00 PM

Wow - that looks like a placer where MathMan and The Actor could spend hours.

I'm glad you had a good trip! It's nice to take a break from the routine, isn't it?

DCup - it certainly was nice to get away. Now if I could just get back into feeling at home... I've been on the road and on the go so much the last eight days that I'm having trouble slowing down. Hopefully the weekend will help.