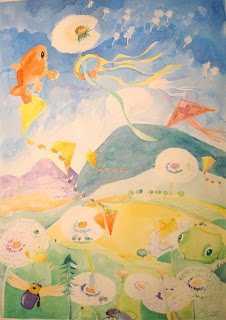 I've been on the road for much of the last eleven days, and I go for three more starting tomorrow. This morning I'm feeling very emotional in a way that seems to need words, so I'm not drawing or painting yet this morning, other than my Morning Pages.

I'm listening to the soundtrack from the Miyazaki movie Spirited Away. It's an incredible movie, visually, and musically - animation taken to a level we seldom see in the West. It reminds me of when I started painting again.

When I began to paint again, after the first careful work with kites, I was trying watercolors for the first time. My first piece came out of wherever. I sensed that there was something important going on, something emotional. While I was painting it I was calling it A Summer's Day. It has kites, which had opened the door a crack the week before. I was over the moon with how open I finally was, and how well the painting was going. My inner artist seemed engaged. I had terrible brushes which made the work tough, and the paper was rumpling up badly, but none of that mattered. The place in the painting was from inside me, and that was a revelation. And I can't describe how it felt to be creating images again.

That evening, during dinner, I told everyone how it was going. For the first time in over a decade I was painting again. Music was playing in the background, on our CD mixer. Daughter had slipped in her new soundtrack to the Miyazaki film. I'd not heard any of the pieces since seeing the movie, and had never looked at the soundtrack. One gentle, lovely number started and I turned, enchanted, to daughter and said, "What is this?" She said it was called One Summer's Day. I began to weep uncontrollably. Everyone was alarmed until I explained.

I'm weeping again now, recalling it. That's what kind of day it is. 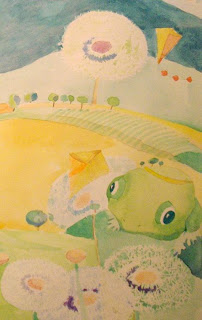 Oui, c'est moi in that Summer Day painting above. Two times. Etienne is realizing this morning that part of his dream for painting is contained still in this work - he wishes to return to the way this was done. He must dream again like this, and paint like a little child. It is his deepest wish. It is why he so admires the paintings of Jane Filer and Hundertwasser. The first time I am in this painting is tres grande, oui I am an entire hilltop. Voila, my broad green back bears trees and a road. Click the image to see it better. I found this amusing, but it also began my secret life in the mind and heart of an artist. It began my life. Prior I had been a knick knack. 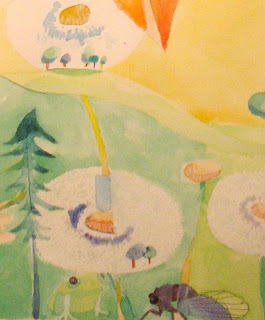 The second appearance is tres petite, smaller than the fly before me. Etienne insists this is a cicada, une cigale, as we say it. I cannot believe they are so grande, regardless of the enormous racket they create here in Caroline. So I think this portrait of moi is the size of a bean, beside that petite fly. Perhaps we are having a conversation. Perhaps we are more of the Peaceable Kingdom which Steve loves to create - leon lying quietly with the lamb, grenouille discussing the lovely weather with the fly...

Do you suppose Etienne will ever let you ride on the kite?

What an interesting peek into how your emotions guide your paintings. Having not one tiny bit of fine arts capability, I'm always amazed at how artists can conceptualize and create such works.

You must give everything you have when you paint such a beautiful painting as Emotions 1. It was so tender that you would share it. I had to go to itunes so that I could hear the lovely tune that brought you to tears. Just the emotion that release of your painting and then the song.. well, it was lovely. thank you

DCup - I wonder if Grenouille would want to ride on a kite. I'll have to ask him.

Where pieces come from is still a mystery to me. That's a big part of the wonder for me.

Odd Chick - Thank you. Sometimes it seems weird to me to share this kind of emotion, but other times (like today) it seems useful. Useful to me, and useful, perhaps, to others. It opens me up more to feeling in general, and that usually makes everything better.

I love the sweetness and magic in the image with the kites.

Come back to us safe and hearty from your trip.

I know you have been busy with traveling but when you get a chance I have passed on a meme for you to do that was started by Katie Schwartz of the blog All the Way from Oy to Vey.

I love the painting you have with the sheep btw-very nice colors and shapes. Plus I love trees and the sheep look cuddly.

steve, this was very sweet and moved me deeply...be safe as you travel and find rest where you can...come home and pick up the brush after you kiss her hello...

I will be getting that music.

Is it a peaceable kingdom, or judgment day? When we were in Scotland, one of our hosts was a Muslim man who told us he would never mistreat a dog. He said he believed that at judgment day the animals can speak and will accuse those who are unjust to them, exacting retribution where it is called for. It looks as though the little Grenouille is confronting the "humanity" of his prey. Grenouille the still small voice that doesn't like a fly to fall to the ground or to be consumed, unnoticed?

Liberality - I hope you are pleased with the answers to the meme. And thank you for the kind words about the "stupid sheep." I like them too, artistic pests that they are.

Linda - Thanks for the well wishes and the compliments - I am home safely, but too late and too tired to pick up a brush tonight. Tomorrow, though...

Grenouille says, "Madame Myrrh, the thought that my past meals might rise up on the last day to judge my treatment of them is sobering. An examination of conscience brings slight worry that I could be accused of failing to use a sauce, or to accompany the insect with the best wine. But, non, I think all would agree that no one was gloated over (no spider, c'est moi), and all were served al fresco et au naturale."