Infrequent rumbles, and the wind in the tulip poplar, woke me early. The main theme was introduced, with hard rain and gently percussive hail. By the long second movement of the sonata, composed mostly of wind and intermittent bored thunder, we were both awake. "I'm not impressed," my dearest said, "if I'm giving up our Sunday morning walk, I don't want to water plants for at least two days." The third movement reintroduced the original theme, with distant growling rising on larger gusts and then a downpour that granted my true love's wish. The gutters overflowed and the downspout sang with the force of water. Then a gentle shower persisted, and lulled us into a drowsy conversation that lasted half an hour.

When we did finally take our walk it was later than usual, but cooler, and fresh. While walking down the furthest, gloomiest street of our usual route, we were surprised to see a large tarantula approaching over the cul de sac. 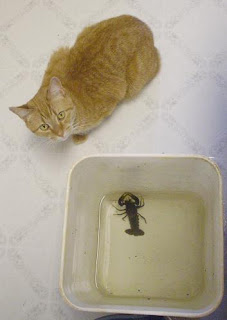 It turned out to be this large crayfish. We see them in streams, if we look for them, but we never see them on land. It was crossing the pavement, going up hill, a long way from the stream and heading in a direction without water for over a mile. We decided to put it back in a culvert nearby, and I quickly popped it onto my handkerchief and bundled it up.

Several times on the remaining walk, deep in conversation about other things, I would feel movement in my hand and look down to find the menacing front half of the crustacean hanging from a gap in the cloth, waving its sharp claws around for something to grab. I had to rewrap it. I expected at any moment to feel it pinch my fingers through the thin cotton, but our conversation totally distracted me several more times. 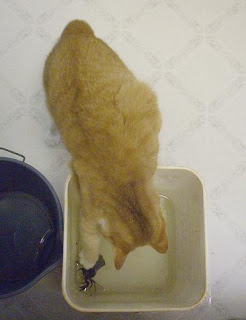 We decided it needed to be in the larger stream it probably came from, and that I would best put it in a bucket until I could carry it there. So we took it home, where it refreshed its gills in rain barrel water and amused the cats and our children. After breakfast (scrambled eggs with cheddar, ricotta, and much basil, wrapped in flour tortillas) I drove it to a dead end road outside our neighborhood, trekked the bucket through a tenth of a mile of wet woods, and dumped it back in the stream, probably less than a tenth of a mile from where it crawled out. It vanished instantly in the murky water, which had been stirred by the rain to the color of weak coffee with cream.

(The first cat picture is of Tamlin, who never actually got interested in the crayfish. The second is of his sister, Lina, who is into everything, and would surely have learned a lesson if the water had not intervened.) 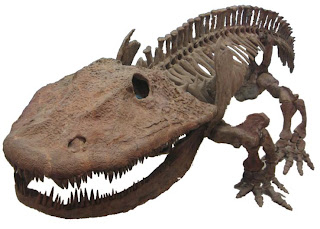 Like you readers, the family Grenouille has brutal origins. This distant ancestral cousin, eryops, was sixty centimeters long (if your feet are grand, perhaps two of them - if petite, then three or four). He dreamed beneath the swamp water and waited for breakfast to swim by, like a floating buffet minus rude garcons. 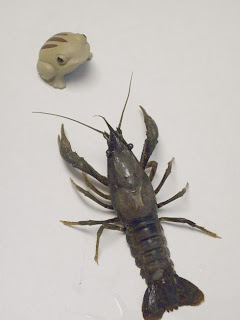 This looks perhaps une rendezvous dangereuse? My cousin's response to this creature would have reminded Steve of Aristotle's practical syllogism. Crunchy food is good. Here is crunchy food. Crunch, crunch. The spirit of my cousin lives today in Louisiana. There the logique has been updated with cauldrons at a rolling boil, fiddle music, and something stronger to drink than swamp water, but the response to this armor plated warrior remains crunchy, with or without a good sauce. I am non plussed. Let him return to the stream from which he came. I have more civil things to eat, and I am proud to wear my flesh, without fear, on the outside of my bones. Et vous?

You did a nice thing by returning the crawfish to the stream. I'm sure he skittered away glad that the cat couldn't get at him.

Ah DCup - in this house I capture and release mice in the winter. In THIS house we live-release houseflies! My children really want it this way, and I've grown accustomed to it, as well. Oldest son is one of the gentlest humans alive, and has dearly loved insects since he could walk. There is a decrepit paper dixie-cup and a small square of paper that he has used to capture and release nearly every crawling thing that has ever entered our home. I think the cup is over 10 years old. House centipedes, palmetto bugs (definitely not my favorite - too much like roaches, the thought of which make my skin crawl), silverfish, wasps, craneflies... The only exception he makes to this gentle way of life is the Japanese beetles, which we all have to pluck from roses and other plants and drop into jars of soapy water. They have no predators, so he can see the logic of this.

So Grenouille can talk of eating the crayfish (and I've enjoyed them steamed and in etouffee) but I really can't imagine doing anything but putting him back in the stream. Yougest son wanted to keep it as a pet, though...

I do not get to this blog nearly often enough... It is so well written and so thoughtful. I love the imagery of the crayfish going back into the water, the cat, the walk, the trees, the rain and then the spirit of Louisiana.

Ahhhh... that is really the only comment I should leave!

You went from a symphony to putting crawfish in your pocket...love it

FranIAm - Thank you very much. I've been enjoying your blog, as well.

Odd Chick - Some people think I have sense, but this post might prove otherwise. It was a wonderful morning. "Random" as our youngest son would say.