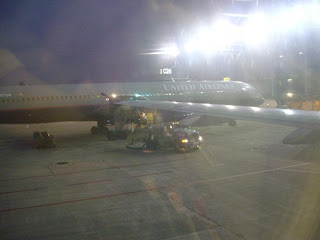 I had to fly to Spokane, WA for business. It was a good trip, and even the traveling was uneventful and pleasant enough. The four hour flight from Chicago (glimpse of O'hare out our plane's window before we pulled back from the gate - being in Chicago made me think of MathMan and DCup) was the hardest part. I hate to sit still that long, and I'm uncomfortable with so many people in close quarters, but I read, did Sudoku puzzles, sipped tomato juice, and daydreamed about the silly things I might do with the items in the Skymall catalogue. I got to Spokane at 1:00 in the morning, my time, but 10:00 local time - so I had a good night's sleep.

Out hotel was right down on the Spokane river, and I walked the paved walkway to Riverfront Park as often as I could get outside. I'll let the photos speak for themselves - it was a beautiful area, and much of this part of the city, with the many bridges, is made for walking, jogging, and biking, with separate lanes laid out for "wheels" and "walking." Click on the images to view larger. The long photos are panorama's my camera assembles from three separate shots. I like that trick.

I liked Spokane - it felt like a real place, like many of the mid sized and small towns in the middle of our country. Things aren't for show, but they show well. Everything neat and clean. People friendly and serious at once. 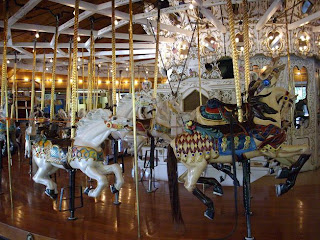 The security staff at the airport, for instance, were cordial, but I had the strong impression that they caught more and did their jobs better than any similar group I'd seen at larger airports back east. I also felt that you wouldn't want to mess with them. But they would smile while they put you on the floor and cuffed your wrists, and they would look you right in the eye. No coastal lack of commitment or less than good manners here. 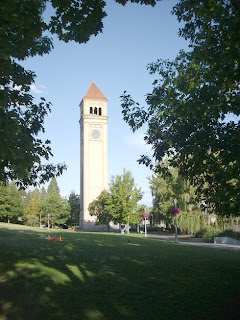 On each of the flights back I had a nose bleed, happily unnoticed by my seat mates on either side, who were asleep. The drier air out west set me up. I flew back through Minneapolis/St Paul, which turned out to be a good move, since I heard that O'hare was shut down for over two hours mid day due to a storm system. I'd have been delayed or worse if I'd gone back through Chicago.

A week later, and I'm still recovering my equilibrium from the three day trip. 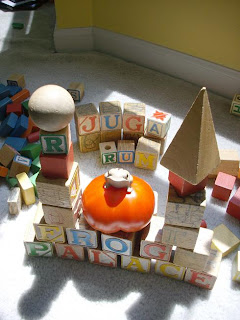 We adults prefer not to make a fuss of ourselves where others might see. We speak of guilty pleasures and self indulgences, preferring to keep them secret from all but a few friends or family. We are serious how we clothe ourselves. We work hard not to stand out or rise above. We claim to love liberte and fraternite, but above all, egalite.

Well I say there are times when we should pipi on sameness and fitting. My inner polywog craves foolishness and pampering. I wish to stand out and be crazy. Peel a grape pour moi! Vive le Roi Grenouille! I want to sit on a grande pomme d'amour in the bright sun du jour and reign with laughter and pomp over all I survey. Build me a palace!

This is not to say we should neglect our duties. Noblesse oblige! But we should sing out and raise our voices above the clamor, and not fear sounding selfish or silly. Steve speaks above of work and duty, but what he recalls most of this trip to Washington is how much he laughed with the new friends he made there, and how much he enjoyed making them laugh, too, watching the laugh lines around their blue Western eyes. Oui, that same sound of laughing, with elan vital, is how his cherie first heard him.

So, voila, here am I living my harmless tomato throne craving. What petite inconsequential things do YOU wish? How can you DO them?
Posted by Steve Emery at 9/10/2008 05:40:00 PM

Ha, I tried to re-enter from canada without a passport, identity, nada...those people took me to a back room with no windows and proceeded to treat me like a terrorist,(one chair while everybody else stood) which I was quickly becoming from being in the situation I was in and getting so angry...all I had was my stupid social # BUT I was in my OWN country (and might add, looked like it!), but they didn't care and didn't crack ONE smile...stupid me to lose my papers and no passport..to canada? this was before the law that says everybody has to have one...my flying partner of the day promptly left me behind, thinking I was heading for jail or worse, back to canada....not funny...

Linda - Holy cow! I have heard stories, but not from someone I knew before this. So why did they finally let you go? What persuaded them that you were harmless?

well, I'm not hard to look at and got a younger man I could sweet talk, to be absolutely honest...NOTHING else would have worked! And I had a plane to catch and pulled the hysterical female and it was OMG, let's get rid of her! They also were being very held up by me( this all took an hour) and had others they really NEEDED to be checking out...and I had a credit card, lol! believe it or not!

Grenouille's indulgence reminds me of a mini-trend a few years back: wearing tiaras in public to places like a supermarket or Target, to accessorize jeans and tee shirts. I want to indulge by buying quantities of late summer plants, even though they will cost too much and fade too quickly. I don't know if my resistance will hold out much longer!

Friday and Monday Chicago was just as wet as can be. I was back there for three weeks visiting - gorgeous weather the entire time until Friday - remnants of Gustav. Monday was just pissing rain all day. Yuk. Glad to be back in Los Angeles.

See you at all my favorite blogs, so I am adding you to my blogroll.

Well...ummm...Steve...my wish is very inconsequential if we're speaking of fantasy...I have longed for years to travel to the North Pole, bring a four-poster iron bed with me, piled high with ten beautiful quilts of resplendent colors and paterns; some of the quilts would be stuffed with the fluffies, warmest down know to imagination; that bed would be situated overnight upon a frozen tundra, bitter whipping wind and freezing rain falling. But I, snug in my bed would snooze and dream, snooze and dream, despite the ferocious weather around me.

Would you come to my blog and accept an award? I would be most honored if you'd stop by to claim it! :-)

Divajood - I just got back from back to back trips to DC (lovely weather) and New Orleans (really awful from the edges of Ike). It ain't fun to get around a city when the end of hurricane is passing through. And thanks for blog rolling me. I'll reciprocate. Jood and Nunley in 2008!

Pagan - see comment above about my complete silence on the web for the last six or seven days... I will be delighted to come over and accept an award - I'd have been coming over regardless, as your blog is in my top 5 to visit daily.

Phoenix Berries - Public or private, tiara or plantings, it is good to indulge in harmless fantastic play, oui? Of course if the problem is the funds for the summer plants... Myself, I just persuaded Steve to build me a palace and borrowed the tomato, which was later his lunch.

Et Madame Pagan - the fantasy you describe sounds tres delicious, to be snuggled in the warmest possible, softest possible way in the most diabolically frigid place you can imagine. Oui, it is marvelous. Of course some fantasies work far better in the mind (or described in your lovely comment) than in the world. Quelle dommage.