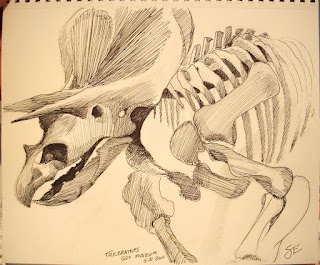 I took the day off today, and we're celebrating my birthday. It's in December, but I decreed several years ago that I would celebrate it in April or May from now on. So today, while our two oldest went to work (summer jobs) Dearest, Youngest, and I went to the Natural Science Center in Greensboro, NC. For my long-ish sketch I was having a hard time choosing between a rhino skull and a hippo skull until I remembered that I could draw the Triceratops skeleton. No contest. What fascinating shapes, and great opportunites for playing with light and dark, positive and negative. Pencil and Pilot pen, 8.5 x 10 inches.

I got out my strange little folding chair (mine is purple), the frame of which snaps itself into shape with a delightful series of clicks, and plunked myself down right in the middle of the museum floor and spent a dreamy 45 minutes or so capturing these shapes and masses. The VERY annoying video playing in the same gallery, providing info about the dinosaurs, repeated about five times while I was there. I was not sorry to leave it behind, but I did enjoy (all five times) the paleontological opinion that Triceratops could reach speeds up to thirty miles per hour. That would have been grand to see (passing me by, of course, not giving chase).

We got lunch at the Snackbar deli on South Elm (decorated entirely in black, white, gray, and red - except the bathrooms which are over the top blue for the guys and pink for the girls) - great food. Then we picked up goodies at a bakery in Mebane on the way back (T. DiStefano's). Then home for some painting and drawing and this blog post. Next we go out for birthday pizza, and then end back home to eat the desserts and open presents. There are still hours of today left, and I'm enjoying my birthday and the company.
Posted by Steve Emery at 5/31/2011 05:43:00 PM

There is nothing like a special day all one's own to celebrate with loved ones.

I love how the triceratops is in a running pose. You captured that so well. Thirty miles per hour! Yikes!

Enjoy the rest of your birthday.

Well Happy Birthday. What fun and what a great dad you are to choose to spend the day with you youngest. Your sketch is terrific.

It's quite easy to see from your beautifully executed drawing of the Triceratops that it would have been very exciting to see him running past from the safety of a good hiding spot.

I'm delighted to read you had such a wonderful birthday celebration and only sorry I'm late in wishing you all the very best.