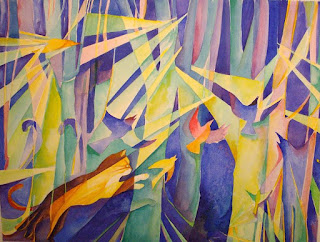 I discussed this painting with Moomin Light today, and she had some ideas that put me on the right track to the next round. So tonight I tackled some changes, starting with one of her suggestions, and moving on from there. Draw some things out more, push some things back, remove two birds that were distractions, remove some red, add some other red, add some orange, warm up some trees with yellow, add a fish...

Still not finished - not sure what's next, though. I'm happy this is stronger after this evening's effort. Removing the large green bird and darkening under the cat were strong helps. Changes in the upper right (as MLight suggested) helped bring that corner more into the picture, though there is only so much I can do there now. That corner had drawn her eye because it was so flat, before, and not united with the rest.

I love how Flight has evolved. MLight's suggestions were excellent. I love the way the light/shadow play over the cat!

And Jimmy Eat World? One of my favorite songs on Rock Band is The Middle by them.

To me the rays of light indicate sound, with the cat more like a conductor than pursuer. The birds and light and shadows are chorus and orchestra, with the fish the pianissimo primaronna. Or perhaps the cat is the tenor, not the conductor. He's got the whole stage in an uproar, but the lady fish will win him shortly.

I see something is missing that wasn't missing before but am not sure what it is or where it went...I am missing the birds but I like the cat darkened up this way...I think there are many diagonals on the left compared to the right, all yellows......and alot of darks in the blues and violets as I think you may have darkened up the painting? I do like the additional orange and red a lot.

btw, it was an old CA license plate ;)

The deeper colors have added more contrast to the painting. It is richer. Lovely. :)

Wow! It is getting more beautiful every time you post! I love the colours of the cat. It reminds me of the art of Ton Schulten. Not that it is the same, but he also works with 'shifting' colours.

All I can say - is absolutely stunning. Gorgeous colors and beautiful arrangement and balance.
Vikki

Lisa - I will be doing a lot more listening and looking into Jimmy Eat World. For sure. And MLight always has good ideas. (That's rule #3.)

Summer!!! What fun! I hadn't seen the painting that way but it works! The big crow is definitely following the conducting like a good choir member.

Linda - I wonder if you're missing the large green bird at the bottom - it DID help tie the left and right sides, but I felt it distracted from the cat's movement and from the dark below. It took me a while to decide to paint it out. It was not a total improvement, but the net effect is still more what I wanted, so I still think it was the right move.
But I do have a left/right issue that I need to think about, and you've brought it into clearer focus.

And LOL! A license plate!

Genie Sea - I looked at it when I got home from work and definitely liked it better with the stronger contrasts. What next, though...

Corryna - Thanks! I will look into Ton Schulten's work. I don't mind comparisons - they are often revealing.

Vikki - Many thanks! This was a lot of fun. I believe you are a stronger composer than I, by the way.

I like this a lot. It feels really balanced to me on several levels, including kinetically and potentially.

Cunning Runt - Thanks very much. It's not done yet, but it's coming along.