I am trying to get into the garden. I have been all around the west walls on the outside, late afternoon light shining over my shoulder and casting my shadow on the stone. I can't find a way in. I have drawn and totally erased the same 19 x 19 inch square three times in the last two days. I'm on drawing four, and I'm not sure it's going anywhere, either. I've had two paintings I could have done, but they're still outside the garden. And I'm going to get in there. It may take some time, but I know my way all around the edges of this place, and I know it's where I need to go next.

I know what kinds of rules I will shed in the passage, but I still don't know how to get what I want on that page. Lot's of other things happen, but not what I'm really after. I could randomly fill up the page with stuff, but that's not what I crave to put there. I'm holding out for the big thing, the garden, my internal Eden, my Chocolate Room*. 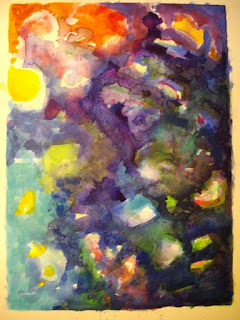 Meanwhile, though, the image I had layered with so much color (to the left) finally yielded part of its content. I discovered this man, looking into the light, hand up as if to knock or to shield his eyes from the brightness. The hand (fist) in the upper left was the giveaway - maybe you can see it in this photo? After several weeks of gazing into this, turning it every way, it was wonderful to get a hint and then to watch it progress. I couldn't understand why he was wearing a suit, though.

I showed several pieces to Dearest today - I was framing Glee 1 and Coming Home to hang at work (they looked great all dressed up), and I showed her the final version of Flight which was almost exactly like the last version I showed over a week ago. 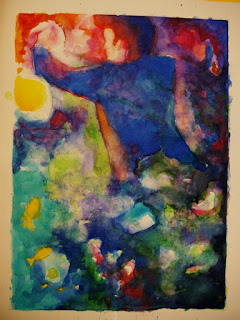 Then, on an impulse, I ran to get this emerging watercolor to show her. She liked it right away and said the man wasn't knocking... "He's more engaged than that." Then after a pause, waiting to see if I got it on my own (nope) she said, "He's conducting."

So now I wonder what will emerge in the foreground.

This is my first attempt to work with this much pigment and color, chasing a little of Nolde's method. The reality is richer than the photo looks - but also less blue. His jacket is more understated in the original, but that also means the light looks warmer and brighter in the original, as well. 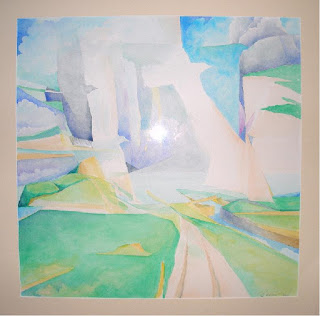 Dearest and I also looked at one of my older pieces (Cliffs and Squalls photo taken behind glass, so you'll have to mentally edit out that white spot in the center!), done back when I was in the gallery, and compared it with the two I was framing today. It looked so light and tentative that it felt unfinished. It's a nice piece, and I like many things about it, but I wish I'd USED MORE PAINT.

This review of pieces, though brief, was good for me, showing a lot of the journey I've taken to this spot outside the garden wall. And it was priceless to get Dearest's insight into The Conductor.

wow, I love all the color!!!!! and I also enjoyed reading your description of trying to get into this....and then the fist! and your dearest's observation...sometimes we get so into what we are doing, we can't see the forest for the tree, it would seem...so now he is a conductor and I too am wondering what is in the foreground. no nudes apparently ;)

when I look at your work and see the after and before, I see how the paint has completely changed and yet, can't figure out how you got rid of it...you remove that much from hot press and not ruin it? at least it looks like alot, maybe not...I can see how you did it with the blue but not the orange over the darker colors, in particular, as well as there is a limey yellow next to the orange which went over what looks like really dark greens...I would really love to know how you do this?

comparing your previous work to your present work, you are two different artists...there doesn't seem to be hardly any, if any similarities, although it's hard to see well..I can definitely see the huge difference and the now is so much more compelling with the color...I am sucked into it instead of observing it somehow! fascinating, thank you for sharing all this!

Linda - you are so welcome! I feel like two different artists. The first one was not sure he was an artist at all. Now I haven't a doubt in the world.

I can pick up an awful lot of paint from this Arches hot press. The almost shiny surface makes it possible. Plus I tend to work with colors that stain less - thalos, for instance, are almost impossible to lift enough to put down anything but a different green or blue. And I scrub the surface gently with the brush, to get most of the paint off.

I also work mostly on dry paper - I bet that allows me to lift more than if I worked wet on wet.

Daughter and I were discussing this piece, and when I asked her what he was doing she couldn't see it either - and when I told her what Dearest had said, Daughter also agreed immediately that, wow, that's absolutely what he's doing.

No idea yet what will be in the foreground. But, you're right, it probably won't be nudes in this one...

I am seeing figures much more in the paint these days. I expect them to show up in my paintings soon.

thank you for the comment on my sketches! It came at just the right time-I was feeling a bit discouraged with my progress, it just helps keep me motivated:)
I loved your paintings, and I'm amazed at the difference.
Hope you have a good week!!
Trish

I'm loving the rich color in the conductor piece. And while I didn't see it as a conductor at first glance, as soon as I read it, I thought, "oh, yes!" Looking forward to seeing more!

You have a very sensitive wife :-)

Yes! I saw the conductor too! And now I see the musicians looking up at him, suspended, waiting for their cue to burst into glorious music in the garden of Eden with chocolate flowers.

Okay I got carried away. Your art does that to me :)

The colors are delicious.

I agree about Cliffs and Squalls. It's beautiful, but it seems like only the first few coats awaiting your (what I have come to think of it) signature colors and depth!

It's so wonderful to read how in synch you and your Dearest are. It warms my heart. :)

I've always admire the light touch because mine is always so heavy (no water color for me - I use it like acrylic)...and yet I can still see the delicacy in your brighter new work. Amazing. So you sit wand wish you could do Emil Nolde and I'll sit and wish I could do Steve.

I wish I could say i say all the things in the first painting that you saw- but then the second - OMG- it's one thing to see it - and then to paint the conductor in all that color - I am impressed all the way to my toes and so excited!!My seeing eye needs more practice and this was such an awakening! I see him in a crowd of people - he's so determined to bring the music out and they are needing the music that they are all around hopeful that he can do it.

Everyone, wow. I came off a particularly discouraging and disorienting day at work, and this was like balm for my soul to see all this encouragement.

Trish - you are so welcome. I hope you keep sketching. I don't do it enough, and it's such a powerful way of seeing.

Leah - thanks! I hope I can bring this to a finish to match the start. I'm not going to hurry.

Susan - Oh yes. Oh oh yes. The one thing I've done in my life that I know was absolutely the right thing was to marry her. Everything else seems to follow from that one perfect move. She has a way of getting right to the heart of things. Oldest is beginning to do it, too, and Daughter some, also. Oldest tends to (just like Dearest) point things out with just a hand full of words. Daughter is more demonstrative, like I am. But I dance all over the details and it takes me a while to get to the heart. They're patient with me.

Genie Sea - I can't believe the color difference in a year and a half. I love it. Thanks for getting carried away - and for the words about my Dearest and I. I wish the same for you.

Tammy Vitale! Goodness! To flip the mediums around, I'd like to use Acrylic like Acrylic (instead of like watercolor)! Canvases coming soon - I bought some small ones so I don't get bogged down like I am with Sandman. And you did see the fish, right? They were mostly accidental this time. Habit, I think.

Odd Chick - Thank you! I'm glad if this post helped you to see more. I learned a good bit from watching others do it, as well. Artists like Linda (Vulture Peak Muse).

Now if I can bring off the rest of this little piece...

MathMan has to see the man conducting music. What a great painting. I love the vivid colors. Did Abner have anything to do with that painting?

Lisa - Abner painted most of this one. There was too much scrubbing and paint shoving and pushing for the lady. She's for the fine lines and edges, and she has to preserve her figure.

Abner just painted a loud colorful mess on another piece, sort of in celebration of his name day. We got carried away with a new rose color I bought recently. I see it on my palette and it's like cake icing; only instead of a finger it's a brush that I can't keep away from it.

We're looking for he gate into the garden, and I decided to see if Abner knows the way.

I love the colors in the first one, but I cannot really see the conductor! But how he emerged int eh second! Super!

I hereby give you the thoughtful and encouraging blogger commenter award for being the best commenter!

Linda - Abner is watercolor brush #2. His name just popped out in a comment I was making over at That's Why.

Mary Stebbins Taitt - Thank you. It was a lot of fun to see him emerge.

Summer - EXACTLY - it must be OPERA! And not just any opera, it must be huge and lush and ROMANTIC! Not Mozart, not Wagner... Something ITALIAN! Something PUCCINI!

I love your Mr. Conductor. I hope you continue to experiment with those deep pigments. They work really well with this painting. I hope we get to see more.