Someone Else's Art - My Addiction

That title could apply to all kinds of art work - Hundertwasser, Nolde, Klimt, Schielle, Filer, Klee - but no, I'm talking about my first series 5 blind pull Dunny. Today I ran four hours of chauffeur service for various family members (our Wed schedule is tough, and Dearest usually gets to run it, not me) so when I got home I decided I was finally going to treat myself to opening a Dunny (I had four of them in the boxes). 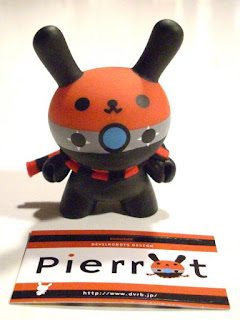 So Youngest and I (he's almost as interested as I am) went to my art table and I took one box out. First we looked at the box, seeing the odds of getting different ones, and trying to decide which ones we might want. This prolonged the anticipation, which is most of the point, to me. Youngest said, "The thing you like the most is the thing I like the least - not knowing which one you'll get!" Then I opened it and was delighted to find it was one of the mystery Dunnies - not shown on the box except in silhouette. It can be distinguished by the little scarf round it's neck. It's called Pierrot, and it's by Devilrobot. 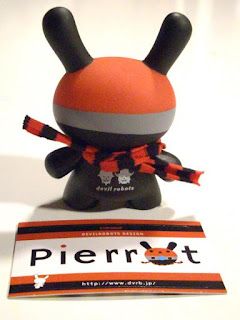 So then Youngest and I looked up the web site for these, and did some research and discovered that this design is selling on e-bay for less than the price new, and people with multiple blind boxes get multiple Pierrots because they are possibly the most common Dunny made, certainly the most common in Series 5. Anecdotes on-line show the chances of getting a Pierrot could be as high as 1 in 3. In the Dunny collecting world they are viewed as something like a plague. I laughed. I like him just fine, and he will go on the shelf with the others and the other oddments that adorn my art table's back fringe.

these are cute little guys...are they childproof? as in 6 and under? just because they aren't worth lots right now doesn't mean they won't be worth lots down the road!

it's very nice that you and your son enjoy doing this together and you share them with him :)

Linda - this is definitely a "kid" thing I enjoy doing AND I like having Youngest get into it with me.

Today it was hard not to open another one! Resisting was fun, too.