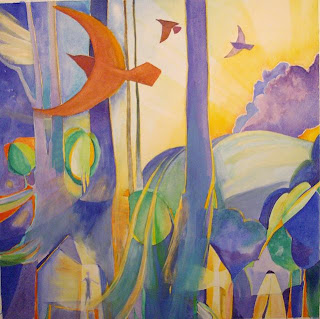 With encouragement from Linda, and a desire to see this image to some satisfying landing place, I continued much of today. First I had to consider what needed to go from the version (above) which I posted a few days ago. My dissatisfaction with the brown bird was first, and he was the first thing painted out. Then I had to acknowledge that I did not like the shapes, the colors, or the movement in the lower part of the painting - particularly the lower left. 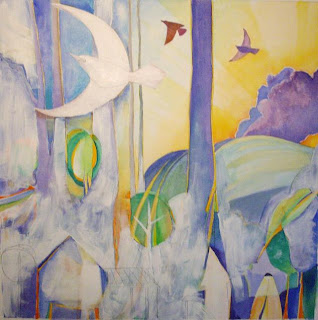 So I ended up painting out large portions, and then redrawing them. I actually went further with the bird than this, which is still wrong and too flat. I had wanted a quiet painting, with someone at the door. Instead the person left, and that made it quiet enough that I wanted the bird to be singing in flight. I also realized the houses were more than incidental, and they need to occupy more of the painting, resolving many of my issues with the trees. 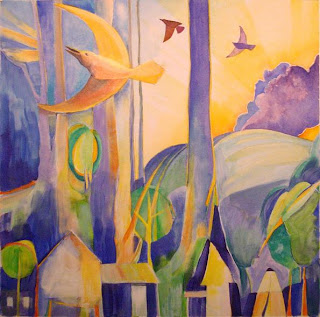 So here is the final version. The bird is actually much redder (deep orange, actually) on his breast and the lower wing - not sure why the red and orange in the rest of the painting is fine, but the bird looks so faded in this photo. He really pops out of the original. I allowed more light and orange into the left and lower portions of the painting, and that has made a big difference.

I'll still live with it a while, and I may change a few minor things before I take it off the board, but it's mostly finished.

This resolves most of the issues. And, more importantly, I found some of the vocabulary I'm looking for. I'm on my way.

that little big bird looks happier now ;) and I like he is singing too and the color is much better, no matter if it looks faded in the photo, I didn't like that rusty color! and I like that we can see the houses more now rather than the giant tree trunks....I thought you were going for a sheltered look with them but now, I like seeing the houses more prominantly...(I would put birds in them but you know....)

I notice you seem to finish a painting almost as fast as you start one...is that my imagination or does it just seem like that? if so, the all important question of WHY?

I had another question please...is that white acrylic or white watercolor and if it's acrylic, do you have to finish the painting with acrylic? does watercolor behave the same on top of acrylic? I have never tried it...just wondering with all the white in this, if you painted the whole thing in acrylic but some of it is the same so now I am really wondering how you do this....hope you don't mind my asking, haha...

Some paintings take a long time to finish, actually - that's why they stay on the boards so long, and why I need to have five or six going at once. I have one large acrylic canvas (not shown at all yet) that I've been nibbling away at (still drafting much of it) for over nine months. Others I just sense that I'm about to over work them, they're going to lose their freshness, and that's often when I feel I should stop. (Of course acrylics are different - they can stay fresh after many many layers... I'm more used to watercolors, where you do have to stop at some point or you lose it). Others I stop too soon - I have several in my portfolio that if I could re-stretch them without damaging them, I would work them quite a bit more - but I'm not interested enough to totally do them over again on a new stretched piece of paper.

And, as I've posted somewhere in the last few years, the paintings aren't the point for me - it's painting. So when I've got what I want from one piece - when I don't feel there is more I can do with it - I'm ready for something else.

And maybe more to the point, and it gets to those last three sentences, I've been looking for a way to synthesize a series of things. I'm trying to paint interior feelings and places, and I see other painters do it, but I haven't been able to get there myself. Coming Home is the closest I've come, and it gives me some insight into next steps. That's how I can start to find out how to paint the inside of my heart.

As for the technical question about the acrylics and the watercolors: I have sometimes painted watercolor on top of acrylics - they do behave differently, and they are more fragile than normal. Since I'm working on hot press, most of the pigments are damaged or removed by the smallest drop of water, so it's all fragile, but it's even easier to remove the pigment if it's on a waterproof surface like acrylics. I've stopped doing that, though, since I'm gaining more comfort with the colors available in acrylics. So in Coming Home, anywhere I painted acrylics (white) I then only used acrylics on top of that. The hard part, and I may not totally have succeeded, is to keep the acrylics looking as bright and fresh as the watercolors, so they blend. Painting on top of a bright white helped a lot. In the first set of revisions (the previous post) I had applied the acrylic directly on the blues and greens, and they looked far too dull. I was quite unhappy with it. This is much better.

And, to come back around to the first question, about finishing, I looked at this painting more today, and I don't think I'm done...

wondering if glee is about painting some of your "interior places and feelings"? trying to get some grasp of where you are coming from with it....

and of course, you have to be expecting this....what are you painting on that canvas for the past 9!! months?? do share in an email, please? I am very curious why you are keeping this under such deep wraps! I am suspecting you are a perfectionist and nothing gets online unless you are happy with it? hmmm...can't say as I blame you! :) the word veri. is "trace" ..

Linda - I'll e-mail, too. The canvas is called Sandman, and it's just not something I'm ready to have out in front of other people yet. It's not so much a perfectionist thing - I've shared all but one piece, successful or failed, since October (and the one I didn't share was a private emotion I painted one afternoon - it's not the painting I didn't want to share, it was the emotion). It's more that this painting is still brewing inside me and I'm not ready for any winds of other thought...