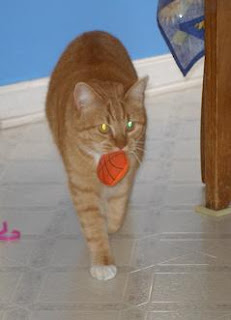 Merry Christmas to all!

I had to move the couch for the tree - a new idea about where to put it - and under the couch we found about 7 long lost catnip toys. The cats went berzerk, tossing them high in the air with their mouths and catching them with their claws, and running around like wild animals with the toys clenched in their teeth. Anything with fur on it is automatically theirs, like the pair of red ear muffs that Lina loves to carry around in her mouth.

I just did a quick special Christmas grocery trip to the posh grocery store. I came back with flowers for the girls and sushi for the boys (and a small bottle of sake). I got fancy cold cuts, some particularly for daughter and some specially for youngest. I got adorable lemon petit fours in a lovely little display. I bought bread and large shells for tonight's dinner (my stuffed shells) - and mushrooms for half of them. I bought a bottle of double chocolate stout and put it in the fridge for some upcoming 9-ball evening with Alex. I bought acorn squash to bake in the oven with little meatloaves in the hollows. Cream was hard to find - it was largely displaced by many brands and flavors of eggnog. I had a good time - it was ridiculously crowded, but everyone seemed in good cheer.

It's a little after noon and I already have a glass of red wine in my hand. A simple red table wine called Red Ink - fitting for the season. Ahhh.

Wishing you all a very Happy Christmas and a Healthy New Year.

I can just imagine the cats going wild!

It sounds like you're ready to have all kinds of fun and food. Enjoy!

Susan and DCup - We did have a good day. Just winding down, now. Nice and quiet until bedtime.

I hope you had a good day, as well - I'll be checking your blogs, though I wouldn't be surprised if you had no time to post today...

Steve, Merry Christmas. I'm enjoying your writing as much as your painting, and that's quite a bit.

Cunning Runt - Thanks! I finally did that sketch of Greylock today. I'll be posting the image later.