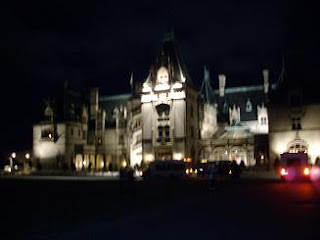 We're back from seeing the Christmas lights and decorations at the Biltmore House in Asheville. We came home a bit early, because youngest has a fever, but we had a great trip, and got some Christmas feeling with the carols being sung there, and all the fireplaces and soft light at the huge house. 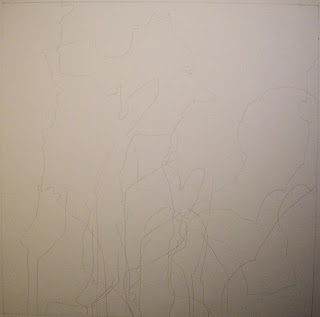 At home I answered some e-mail and visited a few blogs I've been neglecting for a week or more, and then I looked at some art which has been under my skin for years. An image I have been grappling with for over a year, and which I've tried to let out on three or four other pieces of paper, finally came out the way I wanted this evening. I thought this time I would show the progression of the drawing, as well. Here is the simple set of random lines, from the same crowd scene I used to start Glee 1. 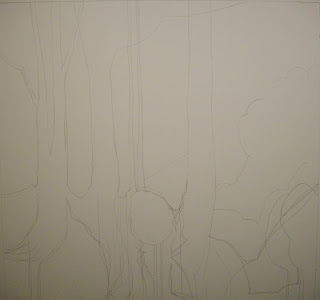 Here I've begun to remove some lines, and allowed the random lines to suggest the trees I need in this piece. Tall silhouettes against the sky - which we saw a lot of at the Biltmore Estate, which takes half an hour to drive out of, once you leave the house! I extended the trees to the top of the page to get the feeling I wanted. I had thought of doing foliage at the top - but that's another painting... 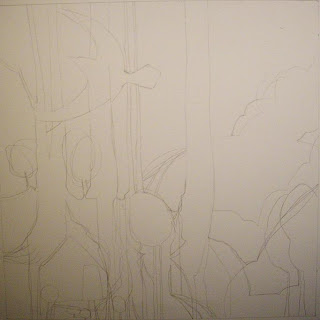 Here I've begun to play with the lines below the trees - what will become the foreground. All of these photos have the contrast pumped up in the camera software, so you can see the lines - they're not so dark in front of me, and I often lighten them before I start painting. I've added some small trees and the house in the foreground, which will have a figure in the doorway, with light streaming around it. I have to decide on a figure... I also added the largest bird. This painting is meant to be in twilight, and the birds are going to roost. That is one of the strongest symbols, to me, of coming home. 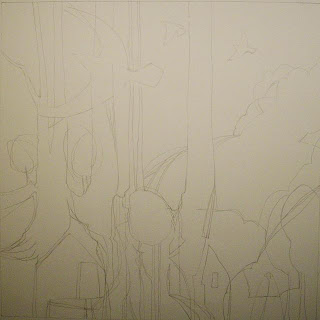 And finally, here I've removed most of the detail around the house - it was too cute. And I added the second house and the lamp. I added two more birds (it's the feeling of all the birds in motion, all going to bed, that means gloaming, to me). I also removed some lines that were cutting off movement I want - there will be more removed as I start to paint, I suspect.

No music played while I did this one... My right brain is getting more assertive on its own, and the left is better at getting out of the way.

I'm also looking forward to spending time with Dearest in the afternoon, keeping her too busy to think too much, and helping with the last errands, before her knee surgery Monday.
Posted by Steve Emery at 12/13/2008 10:36:00 PM

Well, today's plans are bound to be altered by last noight's ambulance trip to UNC Memorial in the middle of the night with a 9 year old in virally caused respiratory distress. During the boring part later, while waiting in the ER for the "all clear" on our sleeping child, I am leaving this comment from my Blackberry. Everything id turning out OK, but Dearest and I aren't getting any sleep.

It's coming up on 8:00 am. Youngest is breathing better. Dearest is home asleep (I hope) and we have a long day still ahead of us. Youngest was just trying to alter his breathing to see if he could push the blood oxygen meter to 100 (it was stuck at 98 and 99 - which are normal readings). When I asked him if that was what he was trying to do he just grinned widely, but didn't take his eyes off the display... That's our boy.

I'm keeping a good thought for all of you!

DCup - Thanks! We're home, I got a little sleep until this evening, and Youngest is fine for now. We'll go looking for underlying causes or complications (like asthma) in a week or two. Family, friends and neighbors were all terrific - as always. It helps, too, that we picked the right hospital when offered the choice. The ambulance suggested the other regional hospital, but we chose the one my Dad has had such good experiences with recently. We were more familiar with it, too, because of that.

Bills to pay later... We're grateful for the quick response, the good care, and health insurance.

oh my goodness, i'm glad your youngest is doing o.k., that must have been scary! (((hugs to you)))

Leah - thanks, yes it was scary, and surreal, and then just ong, tiring and complicated. He was great throughout the whole thing - I am proud of him.