Ursas and Others - Art over Two Days 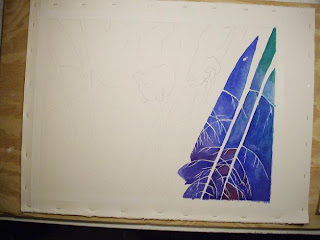 I started the Ursas painting last night, but had no time to photo and post. Here's how it looks to me - I'm seeing it upside down (easier to paint the space between all those branches this way). More color will need to be added, but this is the under painting. At this point I'm thinking the trees will stay the white of the paper - but that may change. Not sure how the bears will be painted... 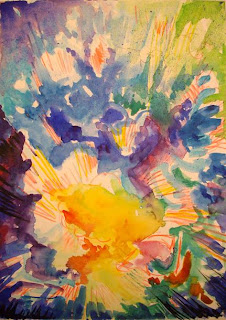 Before I tried anything with the Ursas, I had some "stuff" to work out from my complicated and emotional week. Painting out how this week felt was releasing. I expect to paint over this. It's just the start. Like the lion, the house, and the Blue Rider, this is going I don't know where. I could get addicted to this. 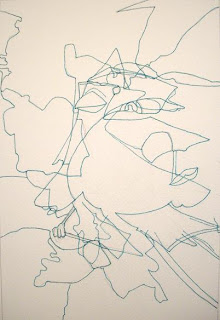 And then, in an hour or so after doing some chores around my mother-in-law's house while she, Dearest and our oldest two were seeing Chicago on stage, I drew a little from the wonderful photos in my mother-in-law's Opera magazine. Blind contour's as usual - and then they suggested things, I erased a lot, etc. This will be a blast to watercolor tomorrow, or maybe even some tonight (we'll see).

While the others were at Chicago, youngest and I put up my mother-in-law's outside Christmas lights, changed some light bulbs in the ceiling lamps, and fixed a toilet flapper problem (actually youngest, age 9, did the toilet repair, with some advice from me. I did the knife work (cutting out the circular optional mount on the rubber flapper, following the instructions youngest gave me). He didn't think much of the repair job (he didn't like adjusting the chain or working in the rusty water in the tank) but I was impressed with his understanding and ability. I didn't have to explain much... He enjoyed the elegance of the trapped air in the flapper, helping to lift it, and then the way more air is trapped again at the finish of the flush. We share a love of simple solutions, both wondering (out loud sometimes) how someone thought of them. 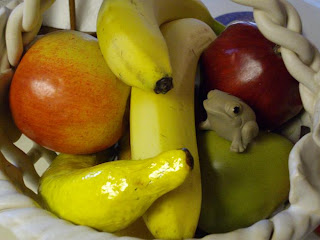 Today I travelled in a black leather bag, with art supplies, to the house of the mother of Etienne's cheri. There I explored the numerous expressions of Noelle, and I will share them with all of you for the season. But that is not yet.

First a pensee about real and not real. Here I am in the fruit bowl, which is a basket. But it's actually a clay bowl made like a basket and then fired in a kiln. Is it a real basket? A real bowl? Neither? In the basket/bowl are fruits. Some are edible, like the deux banans. But the other banan is made of papier mache. And there is a pomme, a pomegranite, and a pear (upon which I sit). Etienne and I neglected to check if the pomme was edible. So we look at these fruits and we wonder which are "real." But aren't they all real? Some are perhaps less edible than others? "Non," you say, the fake ones did not grow on trees. But if man has altered the trees with breeding, to create, perhaps, the cavendish banana, is it any less a human creation than the papier mache banana? A co-creation? Not so black and white, and art makes it even more grey. And the mother-in-law of Etienne likes all this play with the bowl, the basket, and the fruits, too. Voila, she is the one who found the items and assembled them into this game.
Posted by Steve Emery at 12/06/2008 08:57:00 PM

steve, you take your agressions and pent up stuff out in the most interesting and fabulous ways....I wouldn't change a thing...the color is amazing!

I am wondering about all those little teeny branches...are you painting around each one? I can't wait to see this one, love bears.

I cannot see how you get the marks out of the paper if it is this heavy? do you NOT erase them at all? you must have some magic pencil or eraser if you can get that out and I want to know what it is! now.

everything is very wonderful, as always.

Linda - Yes, I am painting around each and every tiny branch - pencil line on one side only, so I have to concentrate and create the branch edge on the other side. It's tedious, but soothing, and I do some between or around other artwork. It's also a terrific left brain turn-off - so boring for the verbal side.

Thanks for the encouragement about the explosive watercolor. I don't know if I'll leave it or not. I don't see myself using it or displaying it as-is, so, to me, it's more fun to explore further.

And the lines on the other piece are done with an archival quality green marker, so they're not meant to come out in this case. They will be part of the piece, like the black lines in the Virgil watercolor, where I'm riding that big fish.

that's very brave of you to leave those lines so emphatically...I do not have the courage nor conviction in my process as I never seem to know where I am going. ;)

thank you for sharing ... I seem to be learning much in your process...

Linda - the interesting thing is that I'm also learning so much in yours... I've now done three small works that are not at all in my usual method, inspired by your work, or by something you wrote me.

I finished the Cardinal Man painting. It's on the next post.