Some might have taken yesterday's post too strongly. I did have a really bad Monday evening and Tuesday morning, but that's largely my own doing because I let things like Christmas expectations (the outside world's, not my immediate family's) get to me. Even when I'm largely uninvolved, because my Dearest and my kids have taken on almost all of the holiday chores, since I don't enjoy them at all, I still feel this pressure to conform, and this guilt that I'm not involved more and not having a good time. It's like a party you feel you have to go to when the last thing you want is to stand around with a drink in your hand and talk about nothing much with a bunch of people you don't really know. I should just quietly and politely say, "No, thanks," and go about my business. But I have found that hard to do. I feel like everyone at the party is talking about what a party pooper I'm being. In point of fact, as Dearest often repeats, "People aren't thinking about you - they're thinking about themselves." Yup - that's undoubtedly true - and I still worry that they are shaking their heads behind my back, or laughing at me. Left over from elementary and middle school, when I was given plenty of reason to suppose this was actually happening (the laughing part).

So events like Monday's blow up leave me feeling stupid (stuck in junior high) and ungrateful, at the same time I'm still annoyed with what our society has made out of Christmas and the "Holidays."

And since my blow-ups don't happen in a vacuum, and other people get hurt (mostly Dearest) I wish I could just get over the whole thing.

And that's all I want to concentrate on that... and instead, I'm going to post something I wrote months ago, and which makes me wish it were still October. 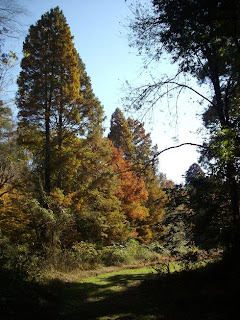 One of our familiar old hikes, from years ago with much smaller kids, is Cedar Rock Park in Burlington, NC. It's a place which used to be called Road's End Farm, before it became a park. There's an old stone mill dam, a very lazy little river, and some short hikes over gently rolling hills that are returning slowly to oak forest. Down by the river there is an old farm road, and between the water and the track is a row of cypress trees. That's the tall tree in this photo. They look like evergreens, but they shed all their needles in the fall, and grow a totally new set in the spring, like tamarack (also called larch). 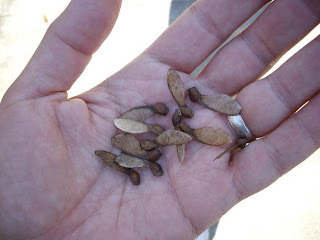 Back when we started hiking this park, almost twenty years ago, there was no bridge over the little river, and you had to rock hop or wade the old ford. Now the bridge is a perfect place to drop maple seeds and watch them spin fifteen feet to the leaf covered surface. The water didn't even seem to be flowing, and dearest jokingly suggested we play Pooh Sticks, the way we do at the Linville River in the mountains. There we all lean over the edge of the bridge and drop the sticks fifty feet before we rush to the other side of the bridge (mind the traffic) to watch and wait and root for our own stick to emerge first. Here we couldn;t even tell which way the water normally flowed. 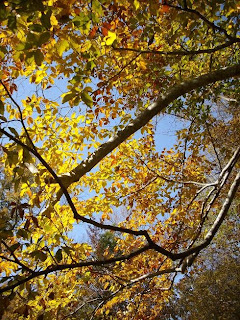 While we don;t have the bright red leaves of the mountains, here in the Piedmont of NC, we do get some really satisfying yellows, golds, russets, and browns. This last weekend the sky was a distant wistful shade of blue, with flat bottomed, slightly violet clouds, hanging motionless around the horizon. It's not the fireworks of the Blue Ridge, but I'll happily take it. And every year we are lucky enough to get these two completely separate autumns.
Posted by Steve Emery at 12/10/2008 09:00:00 PM

Thanks for the tip on the great local park! I called maple seeds whirlygig seeds till my late twenties. We had so few maples in Texas that we didn't know their names.

Summer - I noticed, on my one long drive through East Texas, that the trees seemed to be almost entirely oaks! I'm not sure I saw a maple tree that entire day.

I hope you do get to Cedar Rock Park - it's Alamance County's greatest public treasure.