Coming Home - Not as I Planned 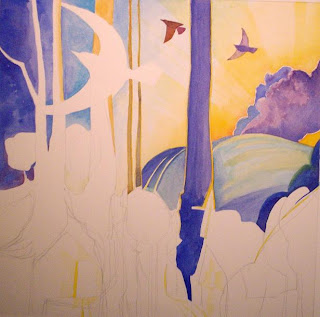 I planned to be painting this today, starting around 9:00 AM. Instead I had a real coming home, with Youngest, as he got discharged from the hospital after a respiratory distress episode last night. Croup, they say - and we need a visit to the pulmonologist in a week or so in order to know if it was just a viral fluke, or if there are some things we can do to prevent this again. He looked pretty out of it on our first ambulance ride, but today, when he perked up (steroids finally got control of the swelling and he could breathe better) he told me he had been awake the entire time and had observed a number of things about the inner workings of the ambulance. He also noticed that the stretcher had a softer, more comfortable mattress than his bed...
I could tell we were ready to go home when he began playing with his breathing to manipulate the blood oxygen meter, trying to push it up to 100. He discovered that taking a few long breaths and then takign a really big one and holding it had the best result. Just like we used to do to increase our ability to hold our breath, or to make a really long deep dive in the pool or at the lake.
So I only got a little done on this painting today (click image for a larger version), and only while pretty tired, since I've only had an hour and half of sleep since this same time last night.
But this was a good place to spend an hour this evening, especialy this time of year. Almost like I watched this sunset in late summer. Today I feel like the far right hand bird in this image. I may be tired, and the bills are still untallied, but my Youngest is OK, sleeping quietly in his room, and he and I actually had a good time today talking about all sorts of nonsense while we searched the web with my Blackberry during our long morning. Dearest came with us for the long night, but we figured we needed to divide our fatigue and someone needed to be able to drive, so she went home around 6:00 and slept a little. That meant that when Youngest became alert again it was just him and I - and I enjoyed it. He's good company.
Posted by Steve Emery at 12/14/2008 09:44:00 PM

I'm so glad he's okay. And that you and MLight got some rest.

Looking forward to more of that painting later!

You had some night, didn't you? He's fine and that's all that matters. I know that sense of peace when you've come through a rough patch with one of the kids.

Your boy sounds very clever and fun to be with. My best to Moomin. :-)

Sorry. I'm getting a tad drowsy. I would love to take a closer look at the painting tomorrow, since I have yet another day off - water damage at school.

So glad that your youngest son is feeling better. When our's found out that he had been that sick, their first comments were about how they could make him feel better. You know us, the plan mostly centered around a full scale invasion armed with every Bionicle that could be carried over. Fortunately cooler heads prevailed and they were eventually convinced that a "get well" card, delivered quietly would be a better idea.

Hope you have a chance to rest your body and mind before heading back to work tomorrow.

good to hear youngest is okay. I'd like to say smugly "mine are grown" but that brings along its own challenges, if not spending the night in the hospital. Caught up with not reading until today, and your work and am jealous that amidst it all there you are creating and here I am...running to cathcup. But I am making jewelry, I do have all those canvasses waiting for some down time (was to be Jan/Feb but bead boutique owner has asked me to work part-time - dare I work amidst my addiction?! stay tuned). I want to make squash bread for my "boss" who gave me a bushel (really two: one acorn, one butternut) and of course finish presents and wrap what need to be mailed (most important to Son in Forida). Here in Southern Maryland we are having 50 degree weather. Even tho I work outside I vote in favor of cold, please! and some snow wouldn't hurt. Hang in there!

steve, thank you from the bottom of my heart for your loving comments and concern...and I am so grateful all seems well with your son...I can speak volumes about Croup as my second son had it from 6 weeks(scary) to about 7 years old and they do grow out of it...it's a bit strange he did not have it until 9 but one never knows with it....hoping all goes well with your Dearest...please let us know!!

your painting is lovely and I especially love the way you handled the complimentary colors-those yellows and yellowy oranges with the blue, blue violet, violet are so soothing...I can't wait to see this one done because of the birds and it's over-all calming feeling - very exciting to watch you create!
XX

Everyone - Thanks so much for the well wishes. I'm doing this on my Blackberry in a hospital setting again - this time I'm with Dearest, prepped for her orthoscopic knee surgery. Weird to be doing this again so soon - but this one was the planned event.

Pagan - Thanks. Yes, he is alert and inquisitive - home schooling augments that.

Alex - The bionicles would have been fun - but the get well card (which we all enjoyed) was more his speed. Today he's been pretty much totally back to normal.

Tammy Vitale - Thanks - and we have one grown, too, so I know some of what you mean. Creating through all this is essential, I find, for maintaining equilibrium. I'm so glad it's become habit. Good luck working amongst all the temptation.

Linda.- Thanks very much for your visit. I'm enjoying this painting, and it's just the right medicine for this time of year and all we have going on.