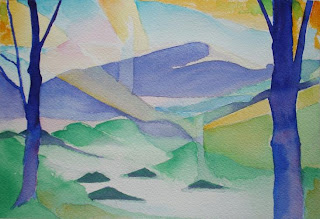 Here's the first painting I did on vacation. These are all done on 10x12 Arches cold press, that was in a block (which helps prevent buckling during painting). I did a border of about an inch, so these images are little paintings, just 8x10 or so. We were near a prominent mountain, called Grandfather Mountain, that looks a little like the one that dominates the background of this composition. And it wasn't until several days later that we saw peaks emerging out of low lying clouds like the foreground. 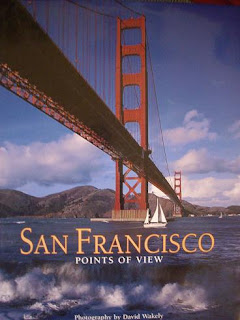 These two photos made up the bulk of the lines that got drawn to start the painting. I didn't think to take a photo of the line drawing before I started. I did that for the next two little paintings, so you'll get to see that soon. 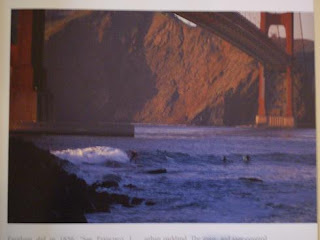 Maybe you can recognize where some of the shapes came from in this painting. Sometimes only one line at the side of a shape in the bridge, or just a few of the rocks in the water, was all that remained. A lot of the first photo stayed, but it became more like atmosphere or lighting. What fascinated me was that the drawing came from the Golden Gate bridge, but the painting arrived from what was all around me, and what I was so happy to be doing for the next two weeks. That happened even though I couldn't see any of the items in the painting from where I was working.
Posted by Steve Emery at 10/20/2008 09:38:00 PM

Wow, Steve. I really like the lines in the painting. The golden shafts of light make the composition really interesting - it gives it movement.

I can see the shapes from the inspiration photo, especially the waves.

DCup - thanks. What fascinated me was the way the bridge (both versions of it) managed to hang in the image, even when it became about other things entirely. What was large and solid and dark in the photos now lights up the sky in the painting. Part of me just sits back and watches all this happen, while the other part uses the pencils and brushes.

I love this little pearl of a painting...especially your washes and that lovely blue...may I guess, french ultramarine?

Linda - yes, ma'am. What would I do without French ultramarine? The whole background of Glee 2 is French ultramarine. I'm not sure I've ever painted a watercolor that didn't have it. One of my trademarks in the paintings is the little yellow fish on the ultramarine ground - my kids look for it in every piece.

Your depiction of the Golden Gate is much calmer than I recall it feeling for me. I guess driving over it will give one a different pulse.