Painting During the Break 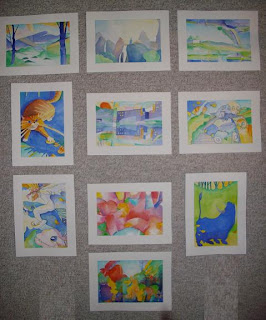 When we went to the mountains I took a block of Arches water color paper along. It was cold press - not my favorite - but that was part of the interest. It was just a 10x12 - so the paintings would be small and immediate. Most were done in one day, or at most over two.

I love to engage the edge of my compositions - so I always draw in and tape an edge. To me the edges are an exciting part of the shapes, so I want to know where they are when I start the drawing and painting.

There were several beautiful photo books in the house we rented - one on San Francisco, one on Oklahoma, and another about Virginia, among others. Those three, in particular, spoke to me. The photos were beautiful, and the shapes were inspiring. So I used images from the books to do blind contour drawings on the pages. After enough lines were there, I would improvise.

It was interesting to see what came out. In subsequent posts I'll show the photos that started things, the drawings that resulted, and the final paintings. I don't have that for all of them, but for a few, so you can see how things change for me. It's a process that still surprises me.

The mountains themselves, and autumn (my favorite season) were all around and inside me, and they came out repeatedly in the paintings.

This group of painting puts me in a nice mood. Thanks

I look forward to more information about these paintings. They're an interesting mix.

I would love to see posts about the process you use to get from inspiration to completion. I'd also like to see more detailed photos of what you put up today.

MathMan - thanks. I hope you'll like them close up, as well.

Alex - thanks - it was good to be home, but it sure was tough to go back to work today... But you knew how I was dreading that when we played 9 Ball at your place last night. Thanks again for the invite - I needed it. And that beer was an experience. I hope the process interests you once I unfold it a bit in the next few posts.

Linda - I'm particularly interested in your comments on these... and how your inspiration comes and changes, as well.