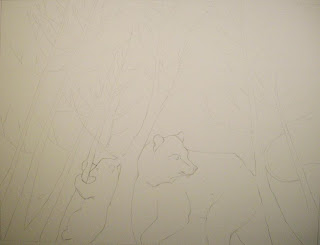 Well yesterday I was on a business trip, with a four hour meeting/presentation ahead of me (today). It went well, but my mind yesterday was full of the diagrams and spreadsheets that made up the most interesting parts of my points. The meeting went well today, but the only drawing I did yesterday was at nearly midnight, when I did a little line drawing of my Blackberry in my moleskine. I don't have it handy - maybe I'll post it later. It was meant to be an accurate sketch, but I think my inner child decided to make it fatter and shorter, to belittle it. We don't like the Blackberry much, even though it's a great help on the road.

Today I got back, after the four hour meeting, several other hours of work in SC, and then the four and a half hour return drive. I had a great day at work, with a number of uncertainties settled, and one major worry handled to my satisfaction. The road home (I-20 E, I-95 N, I-40 W) was at first a great way to view trees against the sky. Especially I-95 near the Pee Dee Rivers, in the area Francis Marion (the Swamp Fox of the American Revolution) practiced guerrilla warfare against the "invading" British. The trees there are close to the highway, tall, graceful, and healthy with all the marshy ground. Liquidambar, Acer, Quercus, Betula. Later, north of Fayetteville, it had grown dark and I was watching the starry sky and silhouettes.

So this image started in my head, the trees at least, and the idea of the animals in between the trunks. At home it became bears, then it became Ursas Major and Minor. This will be fun to paint, especially all those spaces between branches. As usual - click the images for a better view. 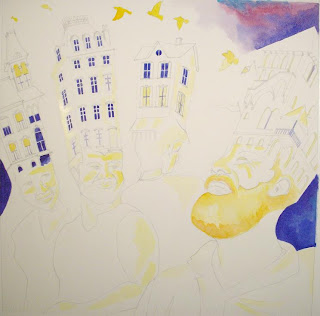 I also pushed Glee 1 further, laying in some of the highlights. I'm working differently on this one - laying in the highs and a few lows (first) to establish the range of contrasts. This is a traditional watercolor method - but not usually mine. I'm using the method here because I realize I have to build this surface up gradually in order to get the light and dark effects I want. I also added the birds I've been intending to put in, but wasn't in the mood until tonight.
Posted by Steve Emery at 12/03/2008 10:08:00 PM

I love the birds(big surprise) and the way you are doing this painting is very interesting...I'm not yet relating to it but having fun watching you do it as it's so different from what I do....I do think my favorite part right now is the upper right hand corner actually ;)

I keep doing this forgetting thing....I meant to also say that your bears are wonderful and am wanting it done just so I can see it done!

Linda - Yup, the birds are no surprise, nor is you're liking the upper right corner best. I thought of you as soon as I painted it, actually. The whole painting will get more painterly as I go, but with all the architecture and the way I want to try to capture the light as I see it in my head, I want to build up to it gradually. This paper lets me add colors, and even remove some, but the stronger pigments (greens, purples, and browns, in particular) are forever once I put them down, so I'm treading gently on this one.

If I can get in the right fluid state of mind, the bears, on the other hand, should not be so complex.

Today, though, I'm tired out emotionally and not feeling positive about anything. Result of several very intense days at work - the usual payback for me.

So I've been making more mess on the pads. I ended up with a surprising accidental result, which I'll play with more, later.