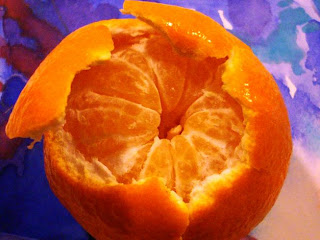 I started to open a clementine before dinner and realized for the hundredth time how beautiful this fruit is. So I took it upstairs and used a corner of Virgil as the Summer as a background. As I opened the fruit I took more shots. 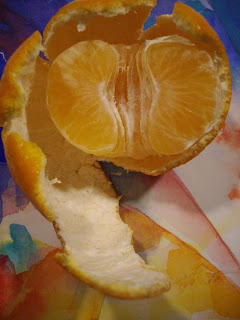 This second shot is untouched by the software - just as the camera took it - but that seemed to miss how the fruit seemed to all five senses. The shot was too pale, too bleached out. Tangerines are so vivid, to me, almost lurid or sexual in their sweet potency and in the parting of the sections. 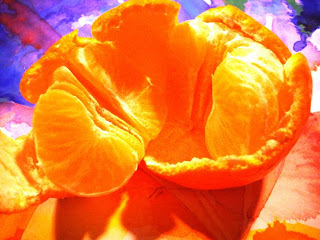 So I played with the intensity and hue of the shots, after uploading them. The fruit itself was long gone at that point, followed by dinner and a game of Scattergories with all but Youngest, and one episode from the Shaun the Sheep, Off the Baa (anything by Nick Park's crew is going to be fun). But looking at these pictures, especially as I augmented the orange so they fit my memory of the taste and smell of a clementine, I could almost believe it was still on my table, luring me with its scent. 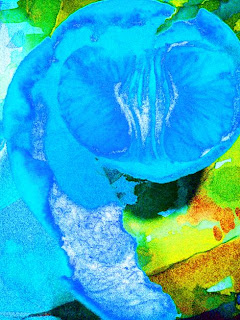 Then I tried going further, pushing the colors around the wheel using the software. I liked this image, for the cool light and dark of the sections, the pattern inside the peel, and the contrast to the acid green and rust in the background.
Posted by Steve Emery at 12/27/2008 11:34:00 AM

mmmm, blues, greens, yellows, a touch of rust...here and in the pictures from 12/26. Very nice! Love the landscape and I just don't usually like them at all. Nice that answering your question about why you paint. Writing is like that...we're jaunting along and all of a sudden something really profound just drops in and in so an unprofound way that it is very easy to miss. Good for you for not missing it!

Clementines are such a welcome treat this time of year. We buy lots of them. Visually,I like the original, unedited photo best. But I know what you mean about wanting to capture the taste and scent of these citrus gems.

I like the first one on top...although the blue one is cool too, just not the clementine anymore...somehow blue fruit doesn't seem fruity to me....I think orange and blue are my favorite paint colors,but in life, it would be blue...

Those pictures really do show the inviting nature of the clementines. I love messing with the color edit software so I can see how you arrived at that last photo. I love its electric feel.

Now I'm going to have to eat one of the tangerines we have in the kitchen. It could be worse. You could have posted pictures of cake.

I am now worried for my tangerines. I will keep a watchful on Dcup so that I don't end up with blue or green oranges.

PS - I could stare at the patterns for long periods of time.

Tammy Vitale - Thanks! I could have missed it, I think, but that question has been so much on my mind that as soon as it was on the paper I let out a shout. Now I have a new question - what does it mean? I mean how do I start to do that? As usual, I can see the first step or two, and that's all. Gotta take those first...

Pagan Sphinx - I see what you mean about the original untouched photo... But I LOVE the brilliant more intense colors in the third photo... That's why my blog is named what it is, I guess.

Linda - I agree about the blue fruit (not fruity anymore) but it is electric, and I couldn't resist it. And like you, I have little orange around me in real life - much more blue.

DCup - I had an art teacher in college who painted cakes - beautiful, lush, heavily iced cakes. They were gorgeous. But I'm glad I only tempted you to tangerines - even if they turn out to be MathMan's. Of course now I could be accused of sowing marital discord...

MathMan - Yeah it was those patterns, and the way they emerged in the blue photo, in particular, that beguiled me, too. I love your photo of the tree that you gave to DCup for Christmas, by the way - more patterns! And good luck guarding your fruit. I have a feeling when DCup wants something it's pretty much hers. I mean, look what happened to you? QED.

Oh, I enjoyed every juicy bite of that tangerine.

Thankfully, there were plenty in the bowl. ;-D

MathMan very kindly shared because there were still plenty in the bowl. Otherwise, there would have been a wrestling match to see who would have the tangerine. And you know he would have let me win. ;-D

Yes - of course - but would any tangerines have been eaten that way?

Moraira where the colors of the sea (blues, turquoises, greens, purples even) are so beautiful they continue to inspire me.

I meant to say that I love the greens and blues in this work, and then to share my thoughts about Moraira :-)