Some Improvement - Quarantine Down

We are doing better so far - some mending of the knee (though a bad episode with side effects of the pain killer - no more oxycodone, and Dearest is not sure she wants to try the substitute, hydrocodone, though I got it for her just in case.,.), Youngest is eating closer to normal, though both he and I have uncomfortable stomachs, even three days after this one, and the quarantine is down so I can get back into my paintings. 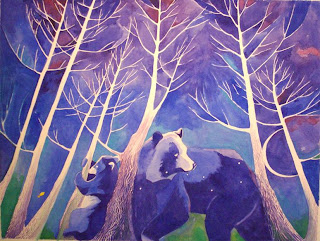 So I did spend a few hours of the day with a brush in my hand, and it felt great. I finished Ursas Major and Minor ("full marks" as they say in England, to Alex who spoke up about the unfinished bottoms of the trees - not that I took his advice (I intend to never take advice about my individual paintings) I had already arrived at the same conclusion - but I was quite pleased someone spoke up about it. That's an invitation to more of you to do the same. Things like, "That bit in the upper left doesn't really work," or "The blue is turned up too high," or "Nice faces, but the nose on that one looks more like a milk bottle." It won't do any good, but I'll enjoy the remarks, and sometimes it might go like Alex's remarks and be what happens. Oh, and I had to move a star in the Big Dipper's handle (the Big Dipper is in Ursa Major, so I couldn't resist). The only star I usually see in the Little Dipper (which is in Ursa Minor) is Polaris. It's the cub's eye. 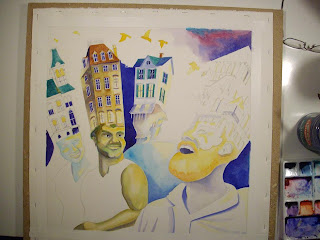 And I worked more on Glee 1. This one has been interesting for me because I have to make up the effects of the lights, and I'm only gradually finding my way to things that work better. There is a limit to how far I can push watercolors (in the repentance department) - acrylics would be better for multiple revisions - but this Arches Hot Press paper lets me get away with a suprising amount.

For the later evening, that's been the hardest time each day for Dearest, we picked out a movie to rent. So we just watched Love Actually with our two oldest. We have been wanting them to see some of the stories in it for the last two years, but they are only just now old enough to handle some of the others, and the language. So many great moments in that movie. And some really hard ones to watch, too - especially Emma Thompson's silent scene to Joni Mitchell's Both Sides Now. The scene works as choreography for the hands as much as it works as a fine piece of acting by a very talented actress and a real beauty, in my book. I found her, for instance, to be so sexy and beautiful in Much Ado about Nothing where she spars as Beatrice with Kenneth Branagh, as Benedick. But this is no surprise, as I fell in love with a similar woman - brighter and more forthright than I am.

And that has been my great happiness.

Teary. I'm so glad you aren't quarentined anymore so I can hug and kiss you now!

steve, that's very sweet what you said about your dearest and made me smile....how nice to have a husband who blogs so you can read what he's thinking...novel idea! ;)

loving the bears and knew I would and especially like the stars on the mama bear-I wondered why they were called that and didn't get it until now...call me something or other...

the building head men, (you asked), are leaving me cold BUT they aren't done yet so I may warm up to them as time goes by...they are really amazing looking but so strange and somehow sinister, which is a bit ridiculous but that's how they make me feel when I look at them...so you asked and I told... ;) on the one hand they do definitely bring on a response but I am not sure that's what you are going for....oh well, there's a long way to go with them yet and I see your sky...wonderful sky colors!

Yeah, whatever with the "I was going to do that anyway" routine. ;) Either way it is much improved and now feels finished when I look at it.

Glee 1 is reminding me of home. I grew up in SF and the houses remind me of the houses I remember from there.

May I just say that I'm really anxious to see Glee progress.

Now, the bears. (1) I love the crescent moon hiding between the trees; and (2) I get tickled by the bear's expression.

Be well! And happy birthday!

Linda - Dearest is usually quite surprised if she learns something from my blog before I've said it... I ain't a very typical guy.

Glee 1 is an image I'm "working" on - this one is not play, somehow. That may be part of the reason it strikes you cold - it's not spontaneous. I'm learning a lot. And the image is one I have to get out, I think. I worked on it more today.

Alex - You go right ahead and think whatever you like. That's part of what I love about you. And I can definitely see the SF thing - I've never seen another city that embraced so many beautiful styles of architecture and made them all work together so well.

I like the Ursa painting and the way you've incorporated the Big Dipper. It's a clever device and a very sweet image.

I'd never see fit to make comments about color since I know from my own experience that no matter how hard I try to replicate the colors of the originals on my preferred computer screen, a five year old g4 power book, the colors look different on our new mac book and my new dell pc at work. Sometimes even the text has slipped so I don't really trust any of it.

My husband had cervical disc surgery in October and didn't have good results with any of the heavy duty meds prescribed. I hope ML is feeling better now but the only thing that worked here was over the counter nsaid's and time.

Regards for a good weekend.

well you all are certainly having adventures at your house! Hope everyone is feeling better. Love the Ursa painting - is that a wee fish over to the left? say yes, whether or not. I want to believe it is. And the idea of the dipper: wonderful! You know the dipper handle star has changed since I was little. I remember reading in a comic book that it would at some impossible future time - which has become very possible. It used to be straight. Now it drops down. I find that magical. Wishing you and yours all that is Merry and Bright and a fabulous New Year. Can't wait to see what you create next!

Susan - Thanks! I had wondered if different screens might be showing quite different versions of work on-line. Several of our PCs look somewhat different, as well.

And Dearest has also fallen back on NSAIDs - thank goodness her pain has been pretty manageable and the TENS unit (an electrical gadget that works wonders) helped a lot, too.

Tammy Vitale - your are correct - that is a fish! The bears needed a fish nearly as much as I did, though most baby bears would not learn that climbing trees is useful for catching fish... And I enjoyed your comments about the Big Dipper's handle. I can't remember how it looked when I was younger, but several of those stars are among the closest to Earth, so if any were near enough to change positions a bit in our lifetimes, those would be the ones. I seem to recall our science texts in school showing the dipper getting quite different over centuries. It makes me want to find photos of it in the 50's to compare to now.