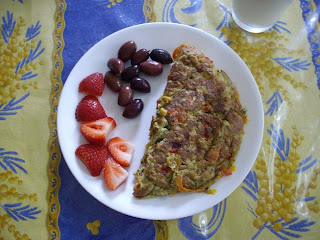 Another weekend, another breakfast improvisation. This one involved fine dicing of sweet red pepper, celery, and carrot, which were then saute'd in a tablespoon of butter in an eight inch skillet. Five eggs, with some salt and about four big tablespoons of pesto, were beaten in a measuring cup, and when the vegetables were beginning to soften and brown, were poured over the top. I had to break through the bottom of this several times with the spatula, to let new liquid reach the skillet, or it would have browned too much on the bottom before the eggs cooked. Finally the entire things was flipped, in pieces, and allowed to finish on the other side. Cheddar was shredded on top.

I served the resulting flavorful fritata-like thing to oldest son and myself, half a skillet for each. Strawberries for him, strawberries and calamata olives for me. 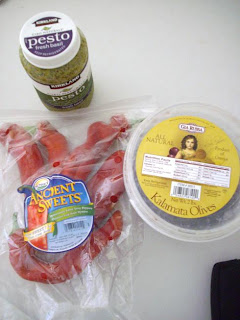 On a recent trip to Costco I strayed from the list and bought these fabulous sweet red peppers, a huge tub of calamatas, and the jar of pesto. All have been delicious. I eat olives with nearly every meal, and these are as rich and satisfying as meat. The long, comical peppers are some of the sweetest I've ever had, and have graced pizza, omelets, stir-fries, and (in long grilled strips) hot dogs and grilled smoked sausages. The pesto was used on part of a home-made pizza, in place of tomato sauce, with marvelous results. It was a good foray off the shopping list. 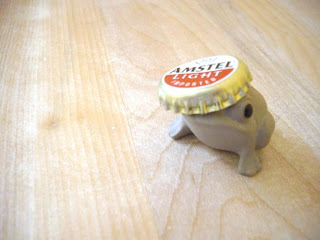 When Steve is away, it is time to play. Oui, there is nothing more refreshing than a plunge into a glass of light beer, served in the manner Americaine: chilled. In the cold months, we may speak of Grenouille de Cafe, but in the warm months, cold beer, c'est tres bon. And the songs we can sing, and our voices so grande... Never do we sound better.
Posted by Steve Emery at 10/04/2008 12:00:00 PM

I'm dying for some olives now.

DCup - we've been on a trip to the mountains (much to post) - and away from these delicious olives. I'm also looking forward to them when we snack this evening.